UnNews:Where will Muse be in fifteen years? 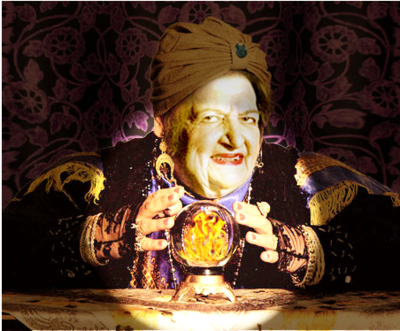 HOLLYWOOD -- Muse is a popular band right now, I guess, mostly due to the Twilight movies. But what will become of them in fifteen years? Because we had nothing better to do, UnNews turned to legendary fortune teller Miss Ella to provide that answer.

I see a mediocre future for this Muse band. Outside of a certain niche, they are chiefly known, if at all, for the Twilight movie soundtracks. Because of this, and with the 25th anniversary approaching, this will lead to a remake of Twilight. The film will be a major event, starring some of the biggest actors of the day:

Quentin Tarantino and Paul Scrader will co-write the screenplay with director Martin Scorsese. Roger Deakins will serve as cinematographer.

Sensing easy money, Muse, which will have broken up five years prior, will reunite and lobby to write the soundtrack. Scorsese will settle for his go-to guys, The Rolling Stones, as well as 102-year-old John Williams.

The film will win 11 Oscars:

"Give me my ten dollars."

"Just give me my ten dollars!"