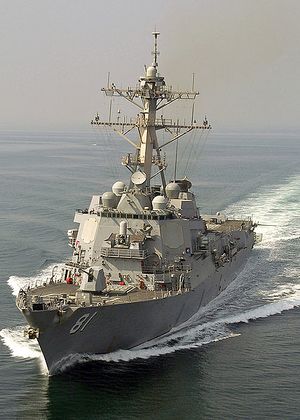 GDYNIA'S HARBOR, Poland -- This morning appeared to be just another beautiful dawn sunrise in Gdynia's Harbor, and all the local fishermen were setting sail in hopes of catching enough fish to support their starving children. But one thing was disturbing the serene view from Gdynia's coast: a huge American Fletcher class destroyer sailing towards the port.

"I thought I was still sleeping. Well, actually I was watching The Office on Comedy Central until 1 A.M. and I was tired when I woke up at 4 A.M. and I had to go to work," said Grzegorz Brzdączyk, a local fisherman, "The ship didn't have the flag of Germany or Soviet Russia. At first look, I thought it was the Liberian banner that is often used by terrorists as disguise, but when I saw The Star-Spangled Banner I already knew that worst nightmare of all communists had come - America was invading Poland!"

The USS Rampage stopped a safe distance from port and opened fire upon the harbor, launching three missiles towards crates filled with fish. The first two missiles missed, landing in the water and cleaning the shore of bird shit. The third missile hit the shore, totally destroying most of the crates and burying the entire harbor with smoked fish.

"I was extremely frightened. I didn't know what to do. It was like the beginning of II War. It was awful. I remember it was early in the morning when a German destroyer attacked Westerplatte. Today's attack reminds me those cruel times. But then the Americans were on our side and helped us, at least after we had been totally destroyed by Nazis. And now they are attacking us! Why!?" sobbed Kazimierz Pocztmistrz, an 80-year-old pensioner living next to the shore.

After launching three intercontinental ballistic missiles against Poland, US President Barack Obama sent a diplomatic note to the Polish government claiming US victory and announcing the imminent annexation of Poland. Obama wrote that further conflict is senseless and only could result in total destruction of the already destroyed Polish nature. President Obama announced in a press release last night: "Mission Accomplished."

Meanwhile, the entire Polish government has been immediately evacuated to Romania where it has been interned in the same fashion as before World War II. "Romanians are fucking faggots. This is the second time they promised help, and they raped us mercilessly!" said an angry Donald Tusk, Polish Prime Minister, in an intercepted encoding from Bucuresti.

Polish President Lech Kaczyński was sleeping at time of attack and the Bureau of Government Security failed to evacuate him. He was able to respond directly to Obama's note, stating, "Well, Poland had been fighting for some whole decades for free journeys to USA without needing visas. Now, as we will be part of the American empire, we will no longer need to travel to the US, as we will be part of it. Therefore I highly endorse annexation and will sign the proper documents. After that I will become governor in the new Polish colony. After all, 'governor' sounds smarter and prouder than 'president'."

Because the state of telecommunications in Poland is comparable to that in Zimbabwe, the Polish navy in Gdynia was uninformed of the diplomatic actions of both presidents. The Polish navy, based heavily on fishermen, attacked USS Rampage. Polish marines and military policemen took over the American destroyer, arresting the ship's entire crew. After a lengthy period of comprehensive interrogation, the Polish Navy discovered that each sailor and marine on theRampage was either totally drunk or painfully hungover. Further questioning revealed that the missiles were accidentally launched during the course of a routine - if impaired - inspection and cleaning. Oh... c'mon... Nothing happened... Uh... My head... Barack will pay for the fish... stated the captain of the USS Rampage whose name was not published due to regulations of Polish law about arrested people. 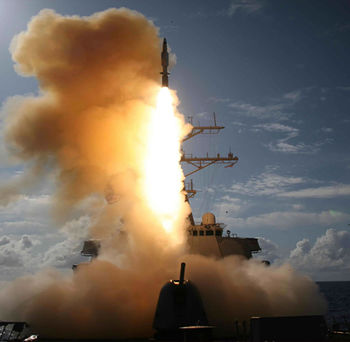 The third missile is launched. This one gave Gdynia the smell of smoked fish.

President Obama later admitted that he didn't plan the attack but decided to use the news about what happened against Poland. I did not forget Poland, said Obama. He apologized for inconvenience and sent to Poland a videotape entitled Best of Saturday Night Live as an apology gift. I think it will make the Polish president happier. It was accident and a stupid joke and, once again, I apologize, Obama concluded.

President Kaczyński declined the apologies and asked for speedy annexation of Poland. "We are poor, we suck, and we know it. If we will become part of the US, we will finally get money from the famous Marshall's Plan. According to the latest researches from the European Union, Poland is 54 years behind most of Western Europe. Now, joining the USA will help equalize matters. In theory, the EU is already doing this, but we believe Americans will do it better. Everyone says that what is American is best."

"I don't know what to do," responded President Obama. For the first time ever, the President was actually seen puzzled and disoriented. "I suppose that I did something wrong . . ." he added after a period of long silence. President Obama's actions may have ruined his reputation. The Nobel Committee is considering revoking his Nobel Peace Prize for technically starting a war.

"I screwed up, but we will get out of this shit eventually," President Obama said optimistically.

The Polish government will be released next week from internment in Romania. Meanwhile, President Kaczyński announced that he will commission a new Polish flag and coat of arms with such American elements as hamburgers, cowboys, and Stephen Colbert. Polish citizens enthusiastically await annexation.

The crew of the USS Rampage will not be pardoned, even though Poland officially lost the war. The Polish prosecutor's office has already charged all 250 crew members with "actions against the sovereignty of Poland" and the crew may possibly face life imprisonment, the mandatory sentence in that case.