UnNews:The President of the United States is a racist 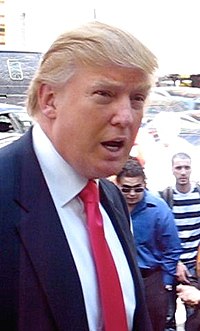 WASHINGTON -- Due to squabbling among our news team, we at UnNews have been actively trying to tread lightly on serious/decidedly "non-funny" stories, particularly those pertaining to Donald Trump. (Trust us, we've been holding back the urge.) As per some unwritten rule, every single UnNews article absolutely must be (at least mildly) funny. Bring the jokes or go home. You can only shoehorn so many fart jokes into a serious article. But we just can't sit back and let this one go. We're not gonna pretend everything's rosy, perfect and sane. The tweeting orangutan has crossed the line; there is no going back.

During a Thursday meeting at the Oval Office about immigration, these words came out of Trump's mouth. These are his exact words:

“Why are we having all these people from shithole countries[1] come here?”

The Washington Post says it. CNN says it. Twitter says it. CNN's Anderson Cooper and, especially Don Lemon, say it. And now, we at UnNews say it. We're still waiting for Faux News to grow a pair to follow suit and censure the man holding the highest office in the land. But they're a bunch of unevolved apes and cavemen, so fuck them.

Trump spent a good portion of his bad campaign insisting that he was "the least racist person" you'll ever meet. Now, in the wake of this latest development, I can say with absolute confidence -- If indeed Trump is the "least racist person," as he claims, we as a nation and as human beings are truly fucked. Trump also claims there was no collusion with Russia, and he's been a known liar all his life, so why the hell should we trust him now, of all times?

If El Presidente, Señor Trump, were a certain wooden puppet, his nose would reach all the way to Pluto... minimum! It would penetrate the stargate from 2001: A Space Odyssey and stab Dave in the heart, the Monolith witnessing every moment, set to Richard Strauss's "Also Sprach Zarathustra."[3]

There's no turning back and backpeddling this one. Donald Trump is a disgusting excuse for a human being. We've known all along that he was a racist, but this is a plain and simple confession. He's an admitted sexual predator (Remember the whole "Grab 'em by the pussy" fiasco?). He has claimed that if Ivanka weren't his daughter, "I'd be dating her." He thinks all Mexicans are drug dealers and rapists and wants to build a wall along the border., flip-flopping on whether he wants us or Mexico to pay for it. He wants to end the Dream Act (DACA). He wants to undo Obama's legacy. He wants his rich asshole friends to avoid paying taxes that they can damn well afford to pay, while the poor and middle class only get poorer. He wants to take your health care away. He wants to take away your free press. He wants to strengthen libel laws so that nobody can speak out against him. Hell, even Bush wasn't this bad... and he caused the War in Iraq and The Great Recession! And the word "nukular."

House and Senate Republicans (or at least what's left of the scumbags), must find their backbone, grow a pair, and impeach this racist, treasonous, deplorable President* before he kills us all.

Mr. Trump, kindly go fuck yourself. (you should see what Millard Fillmore did... and Franklin Pierce and Polk and Taylor and Buchanan and Hayes and Cleveland and Harrison and McKinley and Harding and Johnson both of them and everyone else who was president... I bless the rains down in Africa gonna take some time to do the tings he never had...)

And now, back to the jokes and tomfoolery!