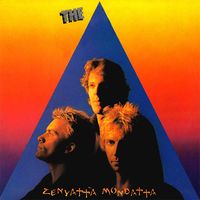 Sadly, the band's name change does not make Zenyatta Mondatta any less stupid of an album title.


LONDON, ENGLAND -- British new wave band The Police announced on Thursday that they are changing their name amidst recent controversies with law enforcement organizations in the United States.

The band, best known for their song “De Do Do Do, De Da Da Da,” will henceforth be simply known as “The.”

“We have been very focused on the goings on across the pond,” The’s drummer Stewart Copeland said in an interview. “It has become evident to us that our former band name was a relic of a different time, one before this racial injustice at the hands of the police has come out in the open, and rest assured that we are most certainly not doing this as a publicity stunt.”

Sting, known for his role as the former lead singer and bassist of The, his successful solo career following The’s breakup, and his affinity for nude yoga (seriously), revealed that he had chosen the name in 1977 because, to quote him, “I don’t bloody know, it was 43 years ago and I was probably on loads of coke when I did it.” When asked about the current goings on in America, his response was, “What the devil is going on in America?”

This comes mere days after the cancellation of the long-running television series Cops, and after Disney removed their film Zootopia from their streaming service after realizing that the main character’s status as a cop would prove controversial with audiences.

Needless to say, the decision of The to change their name has proved controversial, particularly among fellow English post-punk band The The, who have used the name since 1979. In a recent interview, The The’s lead singer Matt Johnson slammed The for adopting the new moniker without consulting him first. “The is my brand and I have used it for 41 years. For these sods to think they have the right to use this name just shows how little they care. It is nothing but a publicity stunt for them, and they haven’t even been active as a band since 2008. Granted, I haven’t released a new album with The The since 2000… but do they think that just because I haven’t been active for a decade, and just because ‘the’ is a commonly used word in the English lexicon, that somehow means they’re allowed to use it? Frankly, how dare they?”

The new The has yet to release a statement on the issue; however, when guitarist Andy Summers was approached on the issue of whether this recent name change means the possibility of recording new material with The for the first time since 1986, his response was simply, “No.”

For more fake news on this topic, read:
Cops cancelled 25 years too late

For more fake news on this topic, read:
Homeland renewed for 9th season