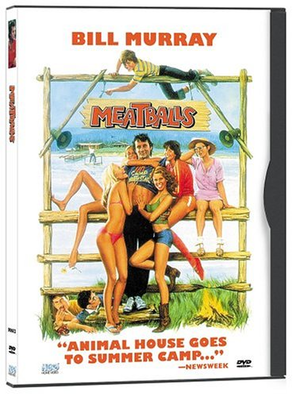 Meatballs, an enjoyable if vapid film by Ivan Reitman and starring Bill Murray, does not contain the meatball in question (nor, incidentally, is it "Animal House goes to summer camp...", as the DVD case attests).

SMITHVILLE, Arkansas - Residents of Smithville, a sleepy hamlet with a population of just over one hundred, are shocked and aghast after a simple meal went horribly, terribly wrong. The dinner, consisting of spaghetti, tossed salad, onion rolls and fresh-squeezed apple juice, was interrupted by an act that shocked and aghasted the family gathered around the family dinner table for a hearty family meal. A meal for dinner. A dinner of spaghetti. Spaghetti and meatball.

"I was just about to dig in to my pusghetti when it happened." said little Cindy Newnan, the youngest child of the Newnan family; a local Smithville clan that regularly gathers in the Newnan family's dining room for dining, Newnan family-style, of the incident. "Someone sneezed. Then it all when to shit. Mom panicked. Dad puked. Barry shit himself..."

"Li'l Cindy!" interrupted Mrs. Newnan. "I didn't raise you to use such language, little lady."

Mrs. Newnan, the mother, matron and matriarch of the Newnan family, is desperately trying to hold her family, the Newnans, together as the reverberations of the dinner mishap threatens to tear it apart.

"I don't know what to do." admits Mrs. Newnan. "As I usually do on Wednesdays, I made spaghetti, all covered in cheese. Then my little girl lost her poor meatball, when somebody sneezed."

"After the as yet unidentified perpetrator sneezed," said Detective Inspector Sergeant Detective Michael Peedleman, Esq., "the meatball, fleeing its assailant, rolled off of the table and on to the floor. We're still trying to determine just why the door was left ajar while the family was readying to consume a meal that included spherical foods. As is typical of foods of that nature, the poor meatball is likely to roll right out the door." 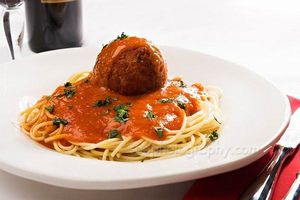 This crime scene reconstruction shows the meatball, pre-rolling, in the safety of its nest.

"Well, it was the strangest thing, I tell you." Mr. Newnan told you. "It rolled right across Mrs. Newnan's garden, before disappearing under a bush. After that journey, I'm sad to say, li'l Cindy's poor meatball was nothing but mush."

Barry Newnan, son of both Mr. Newnan and Mrs. Newnan, as well as a sibling of little Cindy Newnan, thinks that what has been called the Spaghetti Sneezer Meatball Mystery will all end up for the best.

"I managed to push Mr. Newnan out of the way and sample the trail that li'l Cindy's poor meatball left behind. The mush was as tasty as tasty could be." said the food-trail consuming Barry. "I am hoping that next summer the meatball grows into a tree. I'm super-extra hopeful that it grows into a tree that's covered in moss. Also meatballs, and to-ma-to sauce."

Police, hot on the rapidly cooling trail of the Spaghetti Sneezer, have put out an APB for a suspect with a nose and itch that lays there in. To prevent further incidents they caution that the populace, if they plan to eat spaghetti all covered with cheese, should hold their meatball whenever they sneeze.