Hundreds of thousands of angry people demonstrated in Western Europe (here in Madrid) against the song contest results and demanded drastic measures for the future.

Belgrade - The Eurovision Song Contest results yesterday have sparked revolts all over Western Europe, after Eastern Europeans countries brazenly shoved the points on to each other to such an extent that the musical value of the show went down the toilet. "Ex-Soviet Union and ex-Yugoslavia countries could as well send a hat stand or a foghorn on stage and would receive 12 points from their neighbour countries all the same," a music pundit who prefers to remain anonymous commented for UnNews.

After protests in the western industrial countries escalated, the heads of government from the main donor countries of the show, Angela Merkel, Nicolas Sarkozy, Gordon Brown, and José Luis Rodríguez Zapatero, met in Harrogate for an emergency conference. Their four countries have not collected half as many points combined as victorious Russia alone. All four governments could be overthrown in a matter of days by an angry mob if they find no way out. The mood at the meeting was rather tense. After several hours, Merkel met the press and stated that they had had "good consultations" and had "thoroughly analyzed the reasons for the crisis".

"We have found that the secret of the success of the Eastern European countries obviously is their particularism," Merkel said, "and we will draw consequences from this insight at short notice now. When Russia and Yugoslavia are able to split up in order to sweep the contest, we can do that as well."

Then, all four heads of government declared their planned countermeasures in detail. Germany, France, the United Kingdom and Spain are going to split up into at least four or five separate countries each, in order to gain voting power for future song contests. 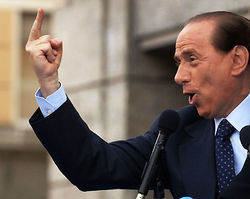 Italy was not invited to the talks and reacted accordingly annoyed, but Italy is not one of the major Eurovision contributors. However, Italy could show substantial separatistic movements on its own, as president Berlusconi sharply remarked.
Retrieved from "http://en.uncyclopedia.co/w/index.php?title=UnNews:Song_Contest_result_spawns_new_separatism_all_over_Western_Europe&oldid=5260652"
Categories: