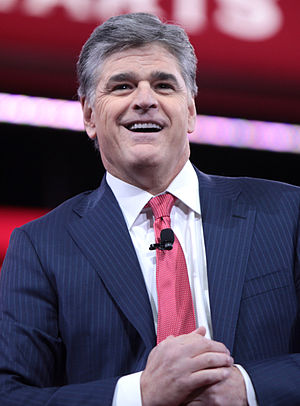 This idiot just got dragged into another idiot's scandal

WASHINGTON -- Are you as tired of this as we are? In a hearing today, it was revealed that Trump attorney Michael Cohen -- the subject of this hearing -- had a "third client"... Fox News host and Right Wing nut job Sean Hannity. Hannity has written several tweets denying this.

“Nope. I'm not affiliated with Michael Cohen. He's too stupid, even for me.”

“It's fake news. I'm gonna go Ed Murrow on your asses! This is McCarthyism! I'll sue!”

“You're goddamn right I did!”

In a world of liars, which liar is telling the "truth"?

If you've been paying attention, you would know that Bill Palmer of the Palmer Report has been telling us for months that Hannity was involved in the "Did Putin and his Comrades rig the 2016 U.S. election?" scandal that has come to define the "presidency" of Donald Trump. When will Mueller bust Boris and Natasha?

Now, keep in mind that this doesn't necessarily implicate Hannity in any criminal activity (even though he's clearly guilty as sin), but as Palmer points out "it does mean that Hannity has been reporting on the Trump scandal under false pretenses, which sets up the kind of ethical scandal that even Fox News may not be willing to swallow. Fox fired Bill O’Reilly last year [over a sexual harassment scandal. Took them long enough! - Ed.] when he became too scandalous."

Lordy, I hope there are tapes of tonight's Hannity show, especially if it's live and the feds take him away. Meanwhile, I'll probably tune in to Rachel Maddow.

Hey, Donald, who only hires "the best people," who's that "stable genius" thing working out for ya?

If anyone cares, the second client is RNC official Elliot Broidy, who banged a Playboy bunny and paid her $1.5 million in hush money, and whose name sounds like a combination of the protagonists from two Steven Spielberg movies -- E.T. (Elliot) and Jaws (Brody). With this and last night's Comey interview, it certainly looks like someone else needs to phone home soon.