For those without comedic tastes, the so-called experts at Wikipedia have an article about Playboy Playmate.

In The Secret of Wealth and Happiness, Hu Humper, under the penname Hugh Hefner, founder of Playboy magazine, explains what led to his success: "the Playboy Playmate." For anyone who was born last night or may be visiting from another planet, a Playboy Playmate is a full-color, glossy, airbrushed photograph of a nude woman with a staple through at least one portion (and usually two) of her anatomy. She is also sometimes known as a "centerfold" because her image appears in the middle, or "center," of the magazine, as its centerpiece, and a fold runs down its center. Some critics of Playmates, such as the hairy-legged feminists at the Natural Orifices of Women (NOW), contend that, when the airbrushing of the model's body is taken into account, one may rightly say that the Playmate has been "spindled, folded, and mutilated, adding a sadomasochistic element to her portrayal."

Although there may be other, lesser nudes (known as "Bunnies") between the covers, so to speak, of the magazine (and its publisher's sheets), there is one, and only one, Playmate per issue. The criteria and process for selecting which model will appear as an issue's Playmate are shrouded in secrecy, but insiders claim that such considerations as the following are part of the procedure:

Playmates, besides having their naked bodies bared to millions of unattractive men whose minds, such as they are, are occupied with impure thoughts, receive much exposure that could make them attractive to porn producers, Hollywood moviemakers, and thong bikini modeling agencies. They also receive thousands of dollars in Playboy Funny Munny, a cruise along the St. Lawrence River to Chicago, Illinois, a one-night stand with the magazine's executive staff, a month's mandatory service as a maid at the Playboy Mansion, a key to the Playboy Enterprises executive washroom, a massage, and the automobile of their choice or a college education. Playmates of the Month may compete against one another for the title of being named Playmate of the Year, which is equivalent to being crowned as the queen of the universe. Playmates, according to the magazine's publisher, are like Marines: "Once a Playmate, always a Playmate."

Some of the black Playmates are:

In the long history of the magazine's degradation and exploitation of women, a couple Playmates have actually benefitted, possibly, from their exposures as the "Meat of the Month," as critics of the centerfolds call Playmates.

The first Playboy Playmate was Marilyn Monroe, whose appearance in the magazine brought her to the attention of President John F. Kennedy, who read the periodical to keep abreast of current events, and the future actress' untimely death by suppository at the hands of either Kennedy himself, his brother Bobby, the Mafia, or aliens from Uranus. 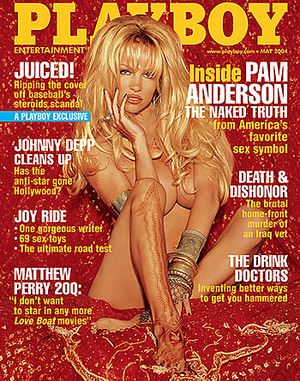 Pamela Anderson started out as a beer salesperson, modeling wet T-shirts that featured such slogans as "Beer Bash," "Queer For Beer," "Guzzle Me," and "Drunk & Disorderly." She was picked out by a voyeuristic cameraman at a Canadian football game, wearing Labatt's T-shirt, and the company, smitten with her beauty (and the fact that she was nearly mobbed by the football fans after being brought onto the playing field for the crowd's worship and adoration), offered her a contract. Subsequently, she modeled for Playboy, becoming the magazine's first and only Playmate of All Time in 1989. Her appearance as a centerfold launched her acting career, such as it is, and she starred in Babe Watch, Home Wrecker, The Fanny, Boobs For Hire, Stacked, Pamela Anderson's Honeymoon with Tommy Lee, and Blonde on Blonde. She has since become a stapled staple of Playboy magazine, having made over 7,000 "appearances" between its covers since her initial photo shoot. As a result of her fame, Anderson was able to share an intimate kiss with wrestler Tushie Stratus, which made the Playmate feel as if she were “on Cloud 9.”

Janet Lupo was Playboy's Playmate of the Month for Nov. 1975. With her 39-inch bust, Janet is, according to Wikipedia, "the largest-busted of any Playmates with a post-Playmate career" (as opposed to Pamela Anderson, who has decidedly had a post-Playmate non-career). Janet is of that interesting breed of Playmate who to this day continues to provide nude images of herself (she even has her own pay-per-view website), yet appears shocked! shocked! when anyone on the Internet expresses sexual thoughts about her. 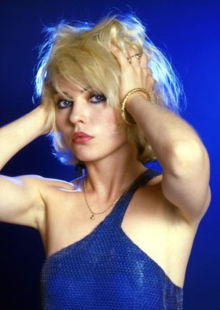 Deborah Harry, after dying her pubic hair blonde to match her I. Q.

Blondie (Deborah Harry) also became famous as a result of exposing herself to the world as a Playboy Playmate. As a result of her appearance in the magazine and because of her large breasts, she was offered the position as "frontwoman" for her rock and roll group. She later parlayed her Playboy and Blondie notoriety into an acting career in which portions of her anatomy were featured in bit parts in such movies as Video Queen, Sweet To Eat, Tails From the Darkside, Cop A Feel, and Going Down in Strawberry Fields.

Laura Hutton became a model and an actress as a result of baring it all before Playboy photographers’ cameras, landing roles in such films as Just A Little Oral Sex, written by transsexual Marti Noxon; Looser Love; From Here to Maternity; and American Gigolo. 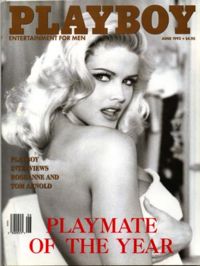 Anna Nicole Smith posing as The Next Marilyn Monroe

Anna Nicole Smith was a Playmate of the Month in 1992. According to Wicked Wikipedia, she was also the 1993 Playmate of the Year. She parlayed her appearance in the magazine into marriage to a rich old geezer with one foot in the grave, although, miraculously, it seems that he could still get it up enough to have sex with Smith, who, judging by her Playboy photographs, was, at the time, an inspiring woman. Shortly after marrying the old geezer, Smith let herself go, gaining a half ton (some say a ton) of weight, each of her gargantuan boobs requiring its own ZIP code. She sold dead chickens at Jim's Krispy Chicken in Texas and dreamed of becoming the "next Marilyn Monroe," as if such a feat were possible. She also worked as a topless dancer during her youth, appearing on stage, as it were, under a plethora of aliases, before posing nude, as Vickie Smith, for Playboy. After the death of her husband, the old geezer's family sued Smith, alleging that "the bitch is a gold digging tramp." The case went to the U. S. Supreme Court (Marshall v. The Bitch Is A Gold Digging Tramp, U. S. S. Ct. 1735 [2006]). The justices unanimously decided in Smith's favor, Justice Ruth Bader writing the majority opinion: "Smith is sexy as hell and deserves all she can get of the dead old coot's money, his family be damned." Smith next tried to establish herself in films as "the next Marilyn Monroe," making The Final Insult and Take It to the Hilt before scrapping her hopes for a film career and becoming a native islander among the Barbadoes following the suspicious death of her son during a visit to Smith's hospital bed.

After being named both Playmate of the Month and Playmate of the Year, Jenny McCarthy was able to date, but not marry, "the next [some would say the new] Jerry Lewis," actor-comedian Jim Carrey, who wants her to undergo another breast augmentation procedure and memorize the Kama Sutra before he will pop the question.