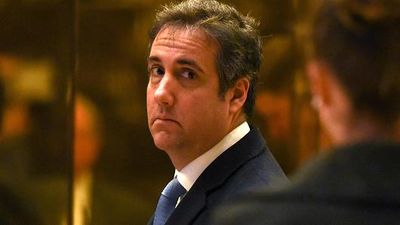 MANHATTAN, New York -- The FBI -- not to be confused with the Fat Bookkeepers of Iowa, or Farting Bear Industries, we're talking about the feds -- Yes, THAT FBI raided the "office and hotel room" of Donald Trump's longtime lawyer, Michael Cohen -- Not to be confused with the Coen Brothers or the Coneheads -- on Monday. Here's a lawyer who's even shadier than Saul! And here's a President who makes Nixon look pretty damn good in comparison, ditto Bush.

Mueller and the feds are pinning Cohen for possible bank fraud, and "the documents identified in the warrant date back years, according to a person briefed on the search," as per The New York Times. Who knows how many years? Probably back to when I Love Lucy was the #1 show on television.

So far, it doesn't appear to be officially connected to the official Mueller investigation, but everything finds a way to be a part of it.

Mr. Trump reacted angrily to the raid. "Fuck you," he told reporters at the White House before a meeting with military leaders. He added, “I have this witch hunt constantly going on.”

The Stormy hush money is only part of the Cohen raid, according to a person in nice looking white Patrick Star briefs. The big dogs also got a hold of emails, tax documents and business records, the person said.

"Agents raided space Mr. Cohen uses in the Rockefeller Center office of the law firm Squire Patton Boggs, as well as a room Mr. Cohen is staying at the Loews Regency Hotel on Park Avenue while his apartment is under renovation," according to The Times.

In order to obtain that coveted warrant (not to be confused with the "Cherry Pie" hair metal band), one must practically get down on their knees, sob and beg. They have to somehow convince a federal judge that agents are likely to uncover criminal evidence. In order to obtain music by Warrant, just go to the record store and buy the CD (or vinyl) like people used to do.

Is this still a witch hunt, Mr. "President"*? Your whole ship is sinking faster than the Titanic as it is. You've fired more people than you ever did on the Apprentice, and ironically, Trump Tower had a fire. And you never did put in sprinklers on the 50th floor. You could be sued for negligence and/or manslaughter. How do you like them apples?

Man, this saga gets crazier every day.