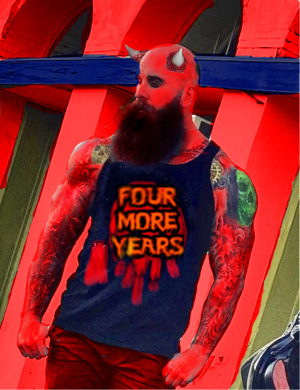 Dr. Lucifer Von Hellfucker in the music video for Pig Rectum's "Spill the Blood of the Innocent." 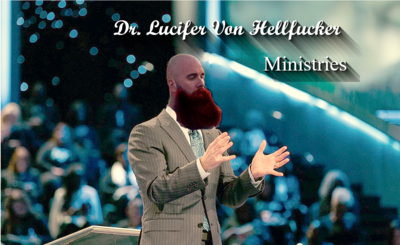 Hellfucker announced his new megachurch on Instagram, set to open upon the end of the COVID-19 pandemic "if it ever happens."

In the lengthy post, Hellfucker said that much of his life had been defined by Satanism, starting when he was "growing up in a Satanic home" as a "warlock's kid," but since May, he had begun to question the teachings he'd been surrounded by.

"When you grow up in a community that holds a shared belief, and that shared belief is so incredibly central to everything, you simply adopt it," he wrote. "Everyone I was close to believed in Satan, accepted Beelzebub into their blackened hearts ... so I did too. I became interested in music, began playing and singing in covens, and started leading "Warship" at The Church or Satan and youth events. Even then I remember being uncomfortable with certain things. Like chords and shredding guitar solos. Then I switched to bass, and eventually drums."

At the end of his Instagram post, Hellfucker announced that he would be opening a megachurch, assuming the COVID-19 pandemic ever ends. "Sorry, horndogs, but I'm pimping for the J man now."

He, with the help of his Zoom choir, then began an impromptu Christianized rendition of Slayer's classic "Jesus Saves."