UnNews:Rudolph the Red-Nosed Reindeer dead at 53 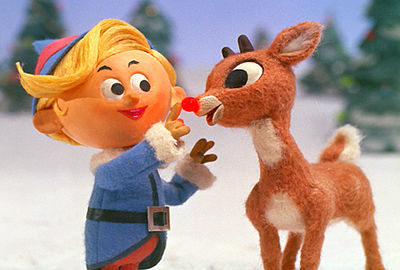 The last picture taken of Rudolph.

A tragedy occurred in the early hours of yesterday morning, as the much loved Rudolph the Red Nosed Reindeer was found dead in his hotel room in Barcelona at around 2:30am. Santa Claus and the other reindeer were notified shortly after, along with his parents Donner and Nixon. The autopsy showed that Rudolph died moments after he entered his room, as his nose ran out of battery.

His death came after a series of violent episodes, which left a trail of damage of the streets of Barcelona, as Rudolph was first hit by a flock of 20 seagulls. He was quickly punctured by their massive mouths and was on the verge to bleeding to death. He was on his way back from a business meeting at 2:15 that morning, representing Santa's Toy Shop in an attempt to sue Apple Inc. for everything they've got after the distribution of the game Operation resembled Rudolph's glowing nose.

To make matters worse, Rudolph was also hit by a Boeing 747 while attempting to fly back to his Holiday Inn room. The airliner was held to many famous celebrities who witnessed the event, including Christopher Walken, who made a statement to UnNews:

Rudolph limped back to his hotel in which nobody noticed him crawl and bleed in the lobby. He arrived at his room, where the last jigglewatt of power from his nose failed, leaving him dead at exactly 2:30 a.m. The hotel manager hasn't made a statement, nor has he expressed any remorse. Actually, he was found inside his office laughing, but that probably wasn't important.

There is still no word from any of Santa's crew, but there will be a planned funeral next week at the University of The North Pole, where all the elves, reindeer, and sorority students will attend. The only cheerful aspect of all this is the new nursery rhyme that will most likely exist: "The reindeer in Spain, was hit mainly by the plane."