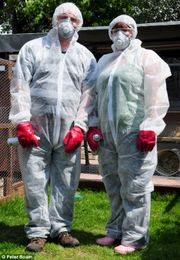 1990s rave house act Altern-8 were at large last night after scared residents of a Basingstoke estate reported seeing the two-piece electronic dance act roaming the streets in their distinctive overalls and face masks. They were first sighted on Thursday evening rummaging through bins, chasing foxes and throwing cats in the air to see if they always land on their feet.

Clarence Brownlowe, 46, arriving home from a local brothel was one of the first to see the act, "I had just arrived home from my visit to the local Thai massage parlour feeling very relaxed and spent when all of a sudden 80s rave act Altern-8 were chasing a fox down my driveway!", Mr Brownlowe (who did not wish to be named) continued in a statement to Unnews, "I had to go back to the massage parlour for another titwank to get my heart-rate back down again."

Altern-8 was formed in Stafford in 1990. From the outset the band's objective was to develop their style which was heavily influenced by the musical elements of similar artists Rumin-8, Fornic-8 and Masterb-8, as well as the Chicago sound of Facilit-8 and early electronic heroes Fuckmunchers. Notable Altern-8 tracks include "What a load of sh-8", "Oh Bugger I'm l-8" and "Shut that g-8".

Local authorities warned residents not to approach the moderately successful dance duo and informed UnNews that they would be deploying pest controllers at the earliest opportunity. The last time Altern-8 were spotted in 1995 they caused nearly £565 worth of damage when a thrown cat smashed a greenhouse window.