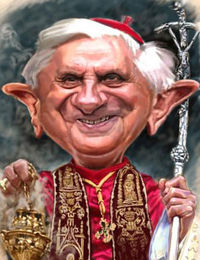 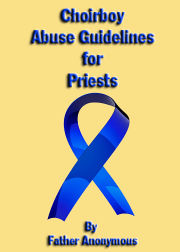 In recent years, investigations in Ireland, Germany, Belgium, Netherlands, Canada and even in the civilized world have found that many clerics had sexually abused children, and the church hierarchy was often found to have encouraged such mundane practices through a feckless policy of cover-ups. The Pope recognized the problem as one of the main factors shaping his opinion that predators be ordered to fantasize on past abuses through reflections [only], such as sharing sexy stories over the popular abuse-fantasy network, “choirboys.xxx”

This month the Vatican published a juicy letter from 1988 that it said showed Benedict, then Cardinal Joseph Ratzinger, the head of the Vatican’s doctrinal office in charge of handling sexual abuse cases, had sought ways for errant priests to better repent. At the time he was unsuccessful, in spite of trying to launch “Play Monk” - a glossy magazine that was to feature a dreamy Choirboy of the Month foldout.