UnNews:Obama says he is "rubber", and Clinton "glue" 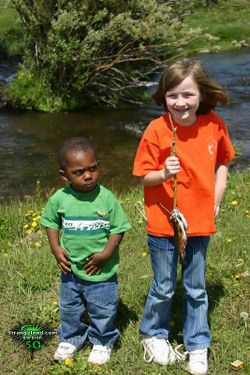 EERILY, Pennsylvania -- In response to Hillary Clinton's claims that he is a copycat, Obama's camp responded that he is rubber, and Clinton is glue. In addition, Obama announced that whatever she said would bounce off of him and stick to her. This revelation comes after Obama copied Clintons picture of the Earth for Earth Day.

Clinton's kindergarten teacher chief advisor, Miss Krabtree said when she discovered that Obama was copying the alleged picture "I can't believe it -- he's such a copycat. We will not stand for anything like this. Millie, stop eating that, it doesn't belong in your mouth. Barack has been doing things like this for as long as I can remember." When asked to elaborate she said "First there was the thing with Jerry. Then that little issue with Billy and Tony. All of those people. I'm not surprised he hasn't tried other kinds of things".

Obama's advisor responded to the accusations by calling Hillary's parents.

Both candidates have been neck and neck in the primaries. Several controversies have risen from comments made on both sides, including Obama's bestest friend Ariana calling Hillary a "monster" on her public forum site, as well as Hillary belittling Obama for being a "big stupid doo doo head".

Public reaction to the claims have been from shock and awe to disgust. One person said in response to the claims "Well, I personally think that it's great that we have such healthy competition going through the party. After all, this is the only country where we can have two sane, mature adults have sensible debates while attempting to unite both the party and the country on a road to a better future. I just love living in Zimbabwe"

Obama supporters have widely criticized the comments, calling them ridiculous. Obama supporter Timmy was quoted as saying in the New York Times that It doesn't surprise me at all that Hillary is doing this, as her campaign is a gazillion percent stupid". Timmy then had to leave because his bedtime was at 9:30.

No word yet on Hillary's response to Obama's claims of "Nanny nanny boo boo".