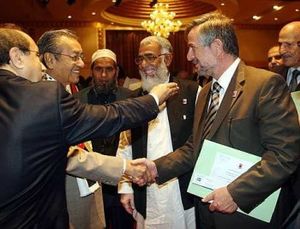 Mahathir[1], with fellow co-anti-conspirators. Note that for safety reasons, the al-Qaeda representative was advised to remove his turban.

KUALA LUMPUR, Malaysia -- Can it get any dumber? In a country plagued by stupid politicians, monkeys who rant at bloggers, and sleeping Prime Ministers, Tun Mahathir bin Mohamad[2], respected leader and ex-Prime Minister of Malaysia, claims that 9/11 was faked. In a press conference today, he said that if Hollywood can come up with Avatar, America can come up with anything.

Critics lauded the ex-Premier's tastes[Citation not needed at all; thank you very much], claiming that this is proof that Hollywood film-making has reached the pinnacle of film-making, as he himself believed that his backyard is populated by an enormous population of Na'vis[3] hell bent on invading his privacy.

Malaysian citizens, however, politely ask him to shut up before he embarrasses the country further, saying that they are already embarassed enough already. We have been watching better movies than Avatar for years! So does that mean all that is faked too? History is fake?NO WAY!!one!1eleven!!1[4] Other analysts claim that the ex-Prime Minister's delusion stems from years of delusional behaviour, most prominent of which is the removal of Holocaust Denial from textbooks[Citation not needed at all; thank you very much].

US political analysts mark the speech as a landmark turn-around of the ex-Premier's opinions. "This is the FIRST time he ever praised anything that came out of the esteemed US of A." Other political analysts[5] point to a trend of Americanization long before this incident. [6]