UnNews:Just another dead doper and a dirtbag dies 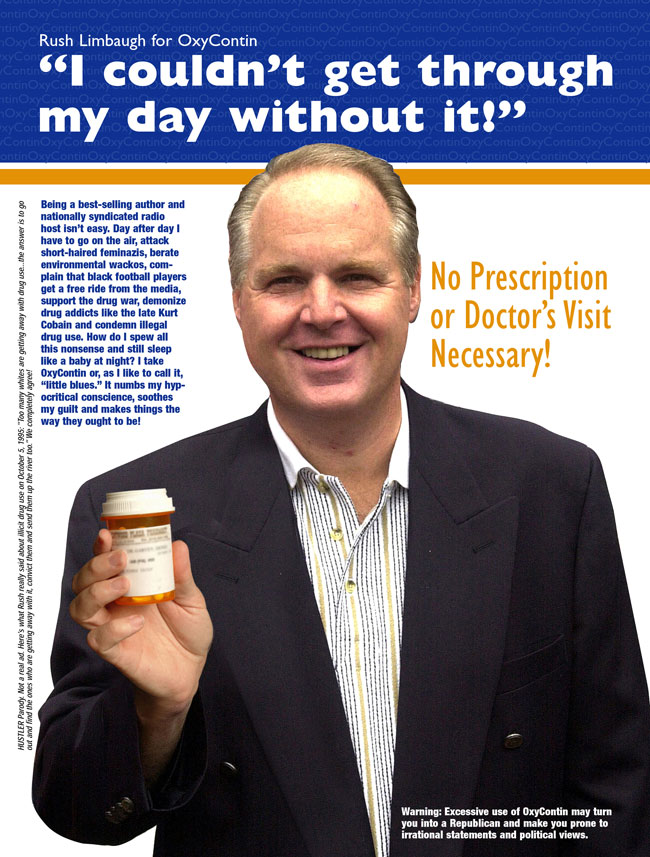 Just another dead doper and a dirtbag dies

Somebody died Wednesday. While a certain group of people might consider him important and his death an enormous loss, we in the real world know, and are not afraid to tell you, that he was just another dead doper and a dirtbag. In fact, he was such a worthless shred of human debris that we at UnNews will not dignify him by naming him. Let's just say that another one bit the dust.

This heaping helping of human feces started his radio career early when he became a DJ for Top 40 WIXZ-AM (now the gospel station WGBN-AM) and a few other stations before he moved to KUDL (Now KMBZ-FM), where he developed his deranged conservative talk radio style.

He left the airwaves in 1979 to focus on sports, and then briefly returned to the renamed KMBZ in 1983. He was fired and moved to another station, KFKB, where he replaced Morton Downey Jr., trash TV icon and father of Robert Downey Jr. When Ronald Reagan repealed the Fairness Doctrine in 1987, he unleashed The Beast Who Will Not Be Named onto unsuspecting listeners.

In 1988, this pond scum moved to WABC-AM in New York, hoping to capitalize on the Bush-Dukakis election cycle. He rose to undue national prominence during the Gulf War, when he supported the war and demeaned "fat, showerless, bearded Communist hippie activists." By this time, the lardass was moved to even bigger stations promoting his toxic propaganda and conspiracy theories.

In 1990, he was heckled to hell and back while guest-hosting The Pat Sajak Show.

During the Bill Clinton era, Been-a-dick Arnold took several swipes at the President and First Lady Hillary Clinton, as well as other Democrats. Republicans thanked Drunk Uncle Pill Popper for their 1994 victory, which ended 40 years of Democratic control of the House of Representatives.

And like a few other right-wing goons, [REDACTED] became a crackpot salesman, for a brand of ties called No Boundaries. A few others would follow in his footsteps, such as MyPillow wacko Mike Lindell.

Always tone deaf, Mr. Blowhard eventually became sonically deaf, possibly caused by the garbage that was coming out of his mouth and spreading into people's ears. In 2006, Con Popper was busted for prescription drugs, which was later suspiciously stricken from his record.

This big fat idiot loved Donald Trump, hated liberals, hated women, hated minorities, and downplayed the seriousness of COVID-19, likening it to the common cold. "I'm dead right on this. The coronavirus is the common cold, folks," he said on his February 24, 2020 show.

Roast in peces. I hope you rot and burn in hell.

And now, without further ado, here's a Rush that people actually respect.