Ady Gil, when it was cool. 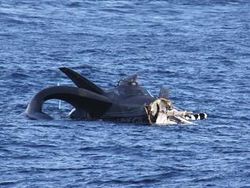 Its not a whale. (Possibly pwned by whale.)

VOSTOK STATION, Antarctica --- First of all, happy new year mah niggas and folks. Hope this year gonna be better than any haters of your own, but Im pretty sure its clearly better than this unlucky ecology geeks.

Sea Shepherd Conservation Society, also known as "Guardian Angel of the Sea", is a non-profit environmental organization founded really long time ago by Australian whale junkies. This whale-crazy rednecks are still overwhelming on their technical skill on whaling. Last year, they have bought 6th generation trimaran "Ady Gil" from New Zealand navy for tactical razorback hunting, which was anticipated by many Australian whale manias.

On January 6th, the party was on merry for this year's first whalehunting with their brand new boat. They were singing "I'm on a Boat ft. T-Pain" with large Kenwood subwoofers on the back, which somehow raged the Japanese whaling ship happened to be on the spot. At the time when clock passed 2:00 PM, when most of cetaceans start whaledancing with spouting and stuff, "I'm on a Boat" caught many attention from whale calfs and eventually the non-profit organization had excelled the Japanese whaling ship by number of seizured whales. This made the strict Japanese whaling ship mad as fuck, made them start to cry for their emperor Hatoyama and get them into horrible behaviours such as plunder and provocation. After all the chaos and ripping offs, Japanese ship attacked the organization's boat by their forbidden waza, Kamikaze, which nobody can evade. Ady Gil, which is supposed to be one of the fastest boat on this decade, met the tragedic end on the earliest beginning of the year. Fortunately all Australian crews were rescued by penguins and now they are staying in Antarctica.

Sea Shepherd is planning to sue New Zealand navy for a defect in the system of the boat.