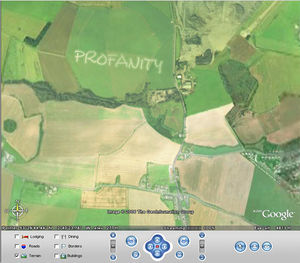 Eminent scientists speculate that this might be a message from Extra-Terrestrials. 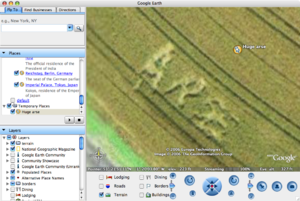 A huge "Arse" found five miles South-West of the giant "PROFANITY". Two miles to the East was found a 550-metre long "Fuck", and three miles to the north of that was a massive "Cunt".

Recent sightings of numerous cryptic messages, including this one seen near Wigan, Lancashire have left boffins and cryptologists baffled as to their meaning. Noel Coward, of no fixed abode, demanded an immediate return to the tried and tested probing methodology by our Alien Overlords.

Both ET and ALF have issues statements through their representatives Klaatu, Barada and Nikto denying any responsibility.

A huge outcry from the Conservative Right has made the profanity something of a legend with youngsters everywhere. Says the Pope, "It is appalling that such crass things would be found, and increasingly more so that they'd be promoted on the news." Scientologists have made no comment except to refer UnNews to Tom Cruise for a profound elucidation on the subject. Tom Cruise had no comment, but continued to jump on a couch and rant.