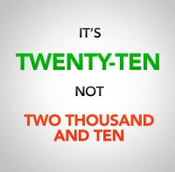 SAN FRANCISCO, Gregorian Calendar - For many, the new year signifies new beginnings and new opportunities. For many others, it's a new opportunity to irritate those who say things differently than you.

With Democrats controlling all three branches of the U.S. governemnt, a small group of intellectual elitists in need of some sort of cause have focused on the year itself, 2010, which is commonly refered as "Two-Thousand and Ten".

Thus coming to the rescue is the irrelevant National Association of Good Grammar, or NAGG, for short. The NAGGers recently released a statement on the non-issue:

The association's head NAGGer Tom Torriglia[1] told the local newspaper in an interview, "It is a complete insult to our marvelous new century, and I am becoming pretty fed up with these idiots among us. It's pronounced 'Twenty-Ten'. Not 'Two-Thousand and Ten', not 'Y2K10', not 'Two-Oh-One-Oh'. TWENTY-TEN!!"

Torriglia, the divinely appointed authority on how to say things, gave his two cents on previous years as well. "For ten years, the entire world has mispronounced the years they have experienced. What you called 'Two-Thousand and Five' was actually 'Twenty-Aught-Five'. Then came 'Twenty-Aught-Six', 'Twenty-Aught-Seven', etc." When asked how to properly pronounce the year 2000, he responded, "Simple: Twenty-Double-Aught!'"[2]

However, the 20-10 movement has met with considerable backlash. "Twenty-Ten? What the hell is that?" said millworker Chip Dewey. "It sounds like a friggin' police code." A various number of banks across the world refuse to accept checks with "Twenty-Ten" written on them instead of the much fancier looking "Two-Thousand and Ten".

"Oh, we're going to win this," says Torriglia. "Pretty soon the entire world will submit to the 'twenty-something' way of life."