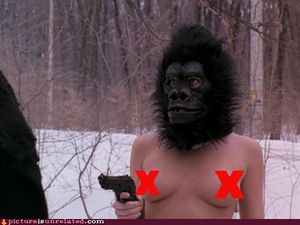 PETA allegedly takes to robbing strangers in lieu of fund-raising.

ANN ARBOR, Michigan -- Charities are always scrambling for donations, and during these difficult economic times, PETA (People for the Ethical Treatment of Animals) is no exception.

One might say they've burned many bridges, with their eccentric, and sometimes dangerous, behavior in support of their cause. Their practices of throwing blood on people wearing fur, insistence on universal vegetarianism for humans, and consuming their own urine, have put many people off, who otherwise might support their ideas about mans humanity toward animals.

Even Buddhists, stopped on the street at random in Marina Del Ray, all expressed the belief that PETA are, "assholes". In desperation, it seems, the group has allegedly taken to armed robbery as a means to pad their depleted funds.

"It appears that they've gone off the deep end entirely", says FBI Special Agent Crawford Metabolite. "These wackos have taken to brazen armed robberies, in broad daylight. Basically, stick ups. The MO is ingenious; a topless woman in a gorilla mask will hold up a victim, using a handgun as incentive. It's ingenious, really. All of the victims have been men, who cannot seem to report much more detail of the robberies than "Man, she had a really nice rack!" Ingenious, I say!"