UnNews:Doll takes the world by storm 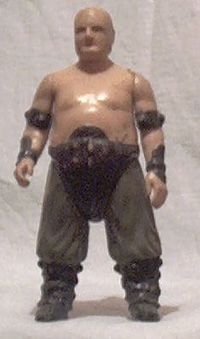 "Off With Their Heads" refrains when a button is pushed. It takes some pressure to push that button, but once Ernie is turned-on, it's even harder to turn him off.

"By Jiminy, who would have believed it," said the doll's creator, Michael Hruby of Nottingham, "I had no idea the doll would catch on so quickly. The children of the lower- and middle-classes play with it with such intense emotion, and I've heard that they've even started to take it into real-life situations to film its presence, much as people did during the traveling garden-gnome craze."

The doll, named Ernie in honor of the American stickball player Ernie Banks--who was known for his joyful enthusiasm, unrelenting energy, and his catch-phrase, "Let's Play Two!"--comes in many colours and both sexes. Sales figures, which are raising the roof, have caught the notice of bankers, politicians, and the honored gentry and ruling classes worldwide. The doll's popularity has even reached into the royal family. "This toy intrigues us no end," said England's Prince Charles, who has been caught up in the frenzy. "When mummsie saw it she clapped her hands like a child," the Bonnie Prince explained, "And now I must to go out and find her one, bring it into the palace, and sneak the little bugger into her bedsuite as a surprise."

"Sales figures are expected to keep rising," says Hruby, who created the doll while watching a British situation comedy set in a time long-ago when all children could afford to better their lot in life. "My factory is running nonstop to meet the demand, and the voices of the masses are being recorded so that each doll will have a distinct speaking voice, which should appeal to the collectibles crowd."

While currently unavailable in China--where the doll is banned and, in what has been explained as an Oriental cultural quirk, is greatly feared--it is a big seller on the college campuses of most ruling-class countries, in the stalls of the poorer African and South American nations, and in the less well-to-do parts of urban and backwater communities alike. It has proven to be particulary popular with young girls living in Islamic nations and among African women, who stand shoulder-to-shoulder and push the doll's button wherever clitoridectomies are still performed.

Accessories for Ernie, sold separately, include a thick rope to drag other dolls through the streets, a "Colour Me Fed-Up" colouring book chock-full of facts about the way the world's monetary system is run (written in simple language that even a child can understand), and a cell-phone camera so that the doll's owners can record where the doll unexpectedly shows up next.

This article features first-hand journalism by an UnNews correspondent.
Retrieved from "http://en.uncyclopedia.co/w/index.php?title=UnNews:Doll_takes_the_world_by_storm&oldid=5377800"
Categories: