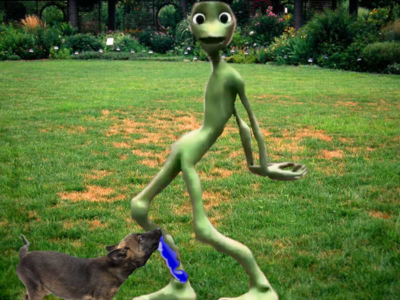 This photograph, taken by the Finkelsteins, has gone viral on Instagram, remixed to "The Safety Dance."

DENVER, Colorado -- A dog bit an alien in the leg Wednesday afternoon, according to KMGH-TV News.

Buster, 5, chomped down on the right leg of Pythagoras Xyzmylwyz when the alien sought shelter in his doghouse. The alien used a radio to contact the police.

"I was brought down to Earth from Tiberius 9 to observe the daily lives of humans. I was curious as to how the modern homo sapien could inhabit such insufficient living quarters," Pythagoras Xyzmylwyz told Denver 7 in an alien language that strangely sounds Greek. "As I prepare for my nightly slumber, all of a sudden, this canine appeared out of nowhere and bit my right leg as if it were a T-bone steak!"

The neighbors, the Finkelsteins, took a photograph of the incident and uploaded it to Instagram, where it quickly went viral, especially when remixed to "The Safety Dance" by Men Without Hats.

The government has taken Pythagoras Xyzmylwyz into custody to conduct experiments, observe his wounds (including one on the penis), and determine whether or not the alien is a threat to life on Earth.

"He seems like a friendly guy," says President Biden, "I've already had a few beers with him. He tells some of the best damn jokes I've ever heard in my life."

"And that's not even the weirdest thing that's happened in Colorado this week," says Governor Jared Polis.