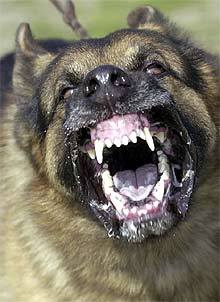 Is there more to the story than meets the mouth?

Vecksing, New York- Earlier today a man was bitten by a dog, on the leg, near the calf. The victim, a 32 year old caucasian male known as "Geoffrey" was delivering on his route when suddenly a dog lunged at the mailman and attacked with its teeth. The mailman felt that the dog was violating his personal space and luckily managed to kick himself free from the jaws of paying the $300 emergency room fee at the hospital. The dog, still seething (and dizzy) from the mailmans boots, attempted numerous times to scale the fence, failed, and spent the rest of the afternoon sulkingly chewing the sack left behind by the cowardly postman.

The dog, 6 year old, Smiler was later found at the scene of the bite and was leashed, tossed into the back of a dogcatcher-mobile and sent to the pound. Where a run of the nametag showed a criminal record longer than the leg she was sinking her teeth into earlier today. Smilers previous charges as filed by Vecksing county pound included loitering, public defacation, urinating on public, private and pool property, barking too loudly at things in trees and many more of these instances. DNA evidence collected from the scene also proved that the bite from Smiler hurt very much.

The trial ended with the jury delivering a final guilty verdict for Smiler and Geoffrey. Smiler was sentenced to 40 hours of Doghouse arrest and 20 hours of running around a golf course scaring away Canehdian geese for acting too violent in self-defence (Smilers lawyer stated his client was simply protecting the house). Geoffrey was found guilty and was charged thrice, for tax evasion (his mail was inexplicably in his delivery sack), battery and urinating in public. The postman was sentenced to 50 hours of community service due after his leg recovery.

Geoffrey was later fired for kicking the postmasters dog in the head.