A Palestinian refusing to play Red Rover in protest of the Israeli's plan to ease access to the Dome of the Rock.

JERUSALEM, Israel -- An attempt by Israeli construction workers to renovate a covered walkway below Temple Mount has raised the ire of Palestinians, breaking the long-standing peace for which the Holy Land has been known since time immemorial. Muslim worshippers, fearing that the repair and improvement of the walkway would in no way hurt them, brought construction to a halt by gathering around the walkway, standing uncomfortably close to the workers and muttering rude things in hushed voices.

"They were pretending like we couldn't hear them, but we could. Sticks and stones can break my bones, but their words really hurt me. Our whole crew is all broken up about it." said one of the workers, pausing to wipe away a tear. "Me and the boys cried ourselves to sleep, we did."

The covered walkway was built in 2004 after a centuries-old ramp to the Dome was damaged during a typical mid-east winter snowstorm, and 'Ivan-hoe Construction Inc.' moved in to repair the foundation and upgrade the walkway with fluorescent lighting, hardwood floors, a cafeteria and an arcade with Street Fighter 2 Turbo and DDR.

"You pesky Israelis don't realize how important this bridge is to the Muslim peoples." said one Palestinian protestor in his 'outside voice' even though it was patently unnecessary to shout while standing in such close proximity to the construction workers. His brusk delivery distracted them from their task of standing around leaning on shovels and spitting. Instead, their consternation at his outburst caused them to stand around leaning on shovels and spit. 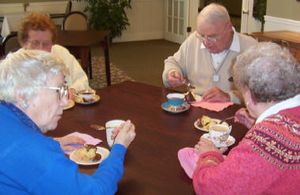 "Conversations during tea have become tense and unpleasant ever since the incident." declared P.M. Olmert (in blue), having tea with three local Imams, Betty, Luke and Gertrude (left to right).

"This walkway is the nineteenth holiest site in Islam." he continued, "Its foundation is the twenty-third. By improving our access to the Noble Sanctuary and the Dome of the Rock, you Israeli occupiers are failing to oppress us."

Representatives of the Israeli government are stunned at the discourteous protests and, by extension, the scurrilousness of the protestors. Several of the rides on the Mount were closed due to safety concerns, as up to one hundred and fifty protestors barricaded themselves in the holy theme park and refused to use the seatbelts on the Teacup ride or the safety bar on the holy rollercoaster. The only casualty thus far was a protestor who was evacuated by helicopter and quickly flown to Beth Israel Medical Center. His injuries are rumored to have been caused by him, in a state of excitement not generally seen in Palestinians, eating his ice cream too quickly.

"It took us all by surprise. Why, just a few days ago we were all sitting around for tea when the news came over the radio that the repairs had been forced to stop." said Ehud Olmert, Israel's Prime Minister. "One of my Muslim friends was so taken aback by the news that he took the last scone without asking if any of us wanted it. Sure, in the end he split it with me, but he did it in an abrupt manner...and he took the big half. Next time we meet for tea I think I'll put a big ol' thumbprint in his scone. That'll teach him. Tit-for-tat has never failed before."