"I'm going to use the money from the commercial to help my baby brother get a heart transplant.", said Sister Agnes, "Our parents died, I'm all he has."

NEW YORK CITY, New York - A new ad by Calvin Klein has even some prostitutes, pimps, swingers and other citizens of the Big Apple raising their eyebrows further than Spock would at hearing McCoy say, "He's dead, Jim!". 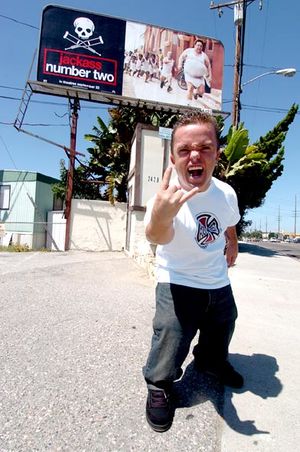 "That was even funner then poo-diving", said Director Wee Man.

"Golly, they even had a little Chastity Belt thing on her that made sure that only her anus could be reached, I thought that touch really kind of sent it over the top.", said Nellie Oleson of Walnut Grove. "Not sure if I'd like that billboard over my Pa's mercantile store. Think I'll ask him to stop carryin' them jeans." And with a flounce of her pretty blond hair she stomped off to tell her mom.

This isn't the first time that Calvin Klein has pushed the envelope, but it is believed to be the first time they atom blasted a whole Post Office worth of envelopes back into the Mesozoic. Their previously controversial work was confined to underage girls beckoning provocatively or a topless girl with three guys. Boring, really.

While the outcry has been enormous, some art critics have pointed out that at least they've reached the end of the line. As Professor Emeritus Robert Mapplethorpe said, "While sure, they are no doubt speculating about images more shocking, such as pre-pubescent child rape, or anally violating a kitten, it is well known that only the National Endowment for the Arts has the money (and desire) to sponsor that kind of thing. And they only work with non-profit foundations and penniless pretend artists living in their mom's basement. Calvin Klein can't qualify."

The nun was unavailable for comment, having not survived the heart attack she had upon hearing Director and star Wee Man say, "Okay, almost had it that time - Take Four!"