UnNews:Barack Obama accused of being too left-handed

Barack Obama being sworn into the senate. Notice that his left hand on the Bible while his wife is standing next to Satan.

COLUMBUS, OHIO - During a recent John McCain rally, Republican Vice-President nominee Sarah Palin brought the heat on Barack Obama for being left-handed. "Mainstream America has traditionally used it's right hand to perform tasks. Senator Obama, however, is not mainstream. Every bill that has come his way, he's signed with his left hand. You remember his disasterous attempt to bowl? Imagine what he'll do when he applies those lefty skills in the White House." She went on to compare Obama to several famous left-handed people, including:

The news media has jumped on the story. Sean Hannity of Fox News asked, "I don't understand why he can't use his right hand. I use my right hand. So do you. Does he think he's better than us?" One Conservative columninst referred to it as "Hezbollah-style motor skills". Experts have questioned Obama's mental capability to lead, considering lefties are more likely to be schizophrenic. 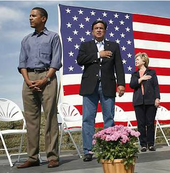 Earlier this year, the Obama campaign released this photo in response to the widely circulated rumor that he recites the Pledge of Alliegence with his left hand over his heart.

Dr. James Dobson of Focus on the Family caused religious speculation during a broadcast by insinuated that Obama is the Antichrist. "The Bible tells us that the Lord Jesus sits on the right hand of God. Considering Barack Obama uses his left hand for everything, it's only reasonable to conclude what sort of power is behind it." He went on to call Obama a "proud sinner". "Jesus commanded us to cut off our hand if it causes us to sin. Obama acts like he isn't concerned that he's going to hell. I find that frightening, to say the least."

During his Special Comment, Keith Olbermann pointed out that McCain is also left-handed. Upon this revelation, McCain campaign advisor Rick Davis sent out this response:

"While McCain does use his left hand, he isn't a natural-born lefty like Obama. He hasn't been able to use his American hand since it was rendered paralyzed after his plane was shot down in Vietnam. Not one to surrender, John struggled to learn how to use his other hand, so that he could put his country first in the senate. Technically, he's amberdextrious, as was Ronald Reagan."

FactCheck.org ran a check on the story, and found that Davis had confused McCain with Bob Dole. Davis dismissed it by accusing FactCheck.org of being "in the tank".