UnNews:"Here comes the aeroplane" baby-feeding technique made illegal by Congress 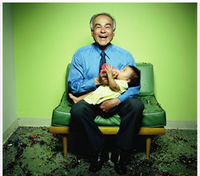 WASHINGTON DC -- Congress today passed a law making the "here comes the aeroplane" technique that parents have for centuries used to force-feed their infant children with illegal, arguing it is too similar to the terrorist attacks on the twin towers on September 11, 2001. "How infants can have such disrespect for the victims of such an attack makes me feel like I should smother my son in his cot" Republican Senator Ron Danser was quoted as saying. Ever since the horrific attacks on the World Trade Center took place, the "aeroplane" technique has become infamous, especially when Hollywood's super couple Brad Pitt and Angelina Jolie where caught using it to feed their baby Shiloh her tofu several months ago. The child was promptly taken out of their care and given to a more well-respected couple, Tom Cruise and Katie Holmes. Pitt and Jolie have since broken up.

After years of tension between the Republican and Democratic parties over the issue, Congress voted overwhelmingly for the passing of the law. It has recently taken prominence in Congress over other issues in politics considered less important, such as the war in Iraq, gay marriages, stem cell research and abortion rights. It seemed almost every Senator had something to say about the subject, except for Vice-President Dick Cheney, who laughed morbidly before disappearing in a puff of red smoke.