The Man with the Older Son

From Uncyclopedia, the content-free encyclopedia
(Redirected from The Man With The Older Son)
Jump to navigation Jump to search

The Man with the Older Son is an 1974 film, the ninth in the James Bond film series, and the first one to be completely divergent from the source text. It was directed by Billy Wilder, produced by Albert R. Broccoli, starring Roger Moore, Sean Connery, Bernard Lee, Britt Ekland, and Tex Ritter.

After Roger Moore's first Bond film, Live and Let Die, turned out to be an enormous flop, the producers were stupid enough to allow Moore to negotiate his contract in such a way that he was guaranteed to act in a few more Bond films.

United Artists, however, did not believe that simply replacing the actor who played Bond would make the movie a hit. Their solution was to offer Sean Connery quadruple what he had been paid in Diamonds Are Forever, and once again cast Connery as James Bond, but this time cast Moore as Bond's son, Jimmy. Due to the bizarre fact that Moore is older than Connery (see The Theory of Children Older than their Parents), the producers decided to name the film The Man with the Older Son. After a rowdy night at a pub, Richard Harris drunkenly wandered onto the set and was subsequently drafted into writting the script, churning it out over three days and 55 Guinnesses.

Billy Wilder, the director of the last two Bond films and the earlier hit Goldfinger, though old and senile, was brought back again because producer Broccoli could not find anyone other director he could manipulate as well. 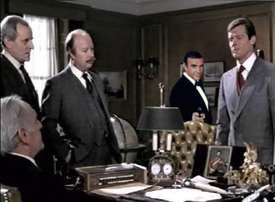 Some of the cast members of The Man with the Older Son, with Sean Connery in the background fucking around as usual.

Sadly, it was immediately obvious to the producers that in the three years since he'd last played James Bond, Connery had gone completely around-the-bend. The actor simply did not give a shit about 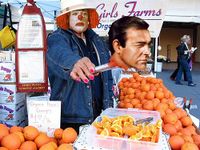 All stunts were performed without CGI

the movie, and refused to follow Harris' script in any way. Throughout the first seven weeks of shooting, Connery quite simply fucked around, doing whatever the hell he felt like doing; this included, among other things, shaving both Roger Moore's head and testicles in a bizarre Zoroastrian ritual.

The film, as originally written by Harris, was about a mysterious, unseen genius named Dr. Scarfeld who planned to create a a enormous spaceborne device that vibrated with the resonant frequency of the Earth. Scarfeld planned to threaten world leaders that he would use the device, called Rama, to make Earth vibrate until it split in half, and asked for a multi-billion dollar ransom to prevent him from doing it.

and shot the poor bastard. Of course, the producers would have simply filmed the scene again, except for the fact that Connery had in fact used a real pistol, and had shot and killed Scarfeld’s actor, Tex Ritter. United Artists, as such, could not risk Connery killing another actor, so they concocted a story about Ritter having died of a heart attack and diminished his role in the script. 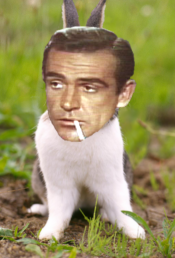 Connery's moving performance as a rabbit in the improvised version of the film led to an Oscar nomination for Best Actor.

Amazingly, however, it was the senile director, Wilder, who came up with the solution to the problem of the script: He suggested they continue filming, but do away with the script and have the actors improvise every single scene.

Oddly enough, Connery turned out to be a master of improvised acting. Using his influence over the other actors, however, he managed to turn the entire film into a comedy. The improvised storyline of The Man with the Older Son turned out to be about a rabbit (played by Connery) and an inanimate gelatinous blob named Wilma (played by Moore) who summoned all of their rabbit and blob friends to help them destroy the small European nation of Liechtenstein (voiced by Ritter). The group of rabbits and blobs were known as the Mega Mega Dudes. Although the movie does not explain why the Mega Mega Dudes wanted to destroy Liechtenstein, nor how they planned to do it, the Mega Mega Dudes do eventually destroy the small nation, killing thousands of innocent people.

Nobody really worked out why Connery came up with such stupid ideas, but the producers had no option but to stick with it. Unfortunately, according to Writer's Guild regulations, the actor's new additions could not be credited, so the producers were forced to still credit Richard Harris as writer, even though his script had been completely revised.

Surprisingly enough, despite the unusual storyline, and the fact that the movie had nothing to do with either the title or James Bond, the movie was actually a huge success, though, at first, nobody had a clue why. In a newspaper poll, it was revealed that well under 1% of the population of Great Britain had actually seen the film.

Finally, over a month after the film was released, it was discovered that almost all viewers of the film were heroin addicts. The Man with the Older Son became a new addiction for the junkies, as it seemed to somehow strike a chord with their heroin-distorted brainwaves. Junkies would sometimes see the movie as often as five times a day.

It didn’t take long for drug dealers to catch on to the popularity of the film with junkies. They bought every available ticket for the movie at all of their local cinemas, and sold them to junkies at heavy premiums (often as much as £1000 for a single ticket). The dealers kept the tickets hidden in balloons hidden in their throats, which was odd since the movie ticket trade was perfectly legal.

The Future of the James Bond Franchise[edit]

It was soon apparent that the discovery of the legal movie trade was in fact like a free publicity goldmine for the James Bond franchise. Despite the fact that 99% of the world’s population despised the previous three Bond films, the next film, sensibly titled The Spy Who Loved Me, broke new records at the box office. From then on, the Bond franchise prospered for many more years, or at least until the shit one came along...