The Day the Earth Stood Still

The Day the Earth Stood Still is a post-apocalyptic incident predicted by Nostradamus. This, as he claimed, would happen in the near-future and has been confirmed by many people as hard evidence that our World was going to end. 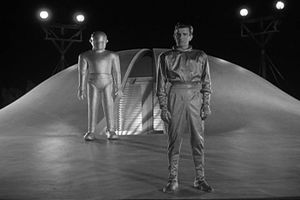 Some idiot claimed he went to some planet called Klatou and took photo of our alien friends who were gonna come to Earth and destroy us. He does'nt even look like an alien. More like George Bush in a gay suit. And what's that thing behind him? A robot? lol

For those without comedic tastes, the so-called experts at Wikipedia have an article about The Day the Earth Stood Still.

Appearently, some alien dude who looks exactly like a human called David or something is going to invade our World and cut off our electricity permanently so that he can steal our pizzas. Lol.

And after that, he was going to enter a space-shuttle and somehow destroy our World with a "laser beam" (as if that thing even exists) and leave us with no nutritious sources to rely on and we were all gonna be screwed because we have no electricity and no pizzas to eat. Yeah, right.

And after that, this David alien was gonna relax in his own planet and eat some energy bars as he resides comfortably in his chair while he watches us die of starvation. Lol. So how is he gonna see us from his planet? Nostradamus claimed he was gonna use a telescope. Ha ha. Yeah, right.

So we all know Nostradamus, the great predictor. His predictions are always right. But end of the world by an alien? Seriously, dude? Do aliens even exist? The only thing closest to an alien I ever saw was my stupid ass moron teacher. And last I checked, my teacher did'nt even know how to handle a pencil, let alone a fucking big ass space shuttle. And here's what Nostradamus predicted :

I see a dozen stars aligned in the sky ... as they shift from time to time. Only then did I realise ... I saw a spaceship. And it would come. Soon. To destroy the world and steal our pizzas.

Lmao do pizzas even exist when Nostradamus was around? What a load of bullshit.

I don't even know why I'm putting this category here. Seriously, if you were actually stupid enough to believe that some alien asshole called David was gonna take over our World and steal our pizzas, then I suggest you get your brain checked. Oh wait, if you actually believe all this alien bullcrap, then you don't even have a brain. And if you actually do have one, it should be made out of cabbage. Other than that, I find no other sensible reason why you should actually think "David" was going to come to our World and cut off our electricity.

The American government believes this? lol. How old are they, five? Looks like they're storing all the pizzas in one secretive place because they're "not taking any chances". And to top it all off, they're making a base underground. They actually believe this alien crap? Rofl they are seriously the stupid-est people I've ever seen in my entire life. And here, I've got a piece of news article to show you how stupid they are. 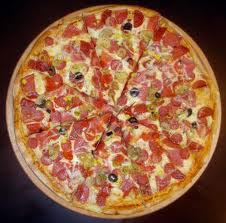 Even as we speak, a thousand pizzas like this is currently being transported to an unknown base in America.

AMERICA -- A particular Nostradamus prediction has struck a nerve in America, which also happens to be the very prediction which cites that an alien is going to invade our World, cut off the electricity, and steal all of our pizzas.

George Osborne, ministry of current economics and affairs, was responisble for bringing up this topic and transporting five thousand pizzas to an unknown base in America. As we approached him, he declined to comment, but it is evident that he is worried if Nostradamus' prediction is actually true. When we approached Barack Obama, America's current president, he commented on Nostradumas' prediction :

I find it a little exaggerated, but I am willing to go along with George Osborne's plans. After all, if an alien were to actully invade us and steal all of our pizzas, the World would fall into meaningless corruption and an un-lawless State. I, President of The United States Of America, am responsible for the potential upbringing of our people, and will not allow this to happen. That is, I will not allow any pizzas to be stolen. It is currently being transported to a secret safe, which I cannot tell you.

Due to this sudden transportation of pizzas, many obsese people have protested against this, but George Osborne, announced, in his defence, that it is for the good of our people that we are keeping the pizzas somewhere safe.

Whether the "alien invasion" would really happen, we do not know, but one thing is for sure - the American gonvernment is prepared for the worst.

Do you see how stupid they are? And they aren't the only morons. There are people who actually live under bridges or something. What the fuck are they thinking? But I'm homeless! they said. Lol. As if I care. They are probably just trying to adapt to the World when "all the electricity is cut off". Fucking idiots.

The scientists claim they got a signal from outer space from "Dippy". And this is the fucking machine which they got the signal from. Are you fucking kidding me? This piece of shit? LMAO ROFLS

These idiotic assholes actually thought up of different concepts on how this "David" guy is gonna invade our planet. Really, dude? Enough with the 2012 bullshit, now the scientists are going fucking retarded over this. You get Albert Einstein here if he was still alive, he would have lolzed until he cried.

Some scientists claim the alien's name is not "David", but actually "Dippy". LMAO! If you want to fool us by creating some alien bullshit, at least think of a proper name for it! I mean, "Dippy"? Really? Lol the Scientists really are retarded or something.

And their explanation is stupid. Really stupid. So there they are, saying they received the name from a message from some wack-ass "unrecognised" signal detected in space at a speed of seven hundred kilometres a second. Wow. Cool story bro. It's as believable as the condoms I used on your mom last night.

And then there are the people who claim they actually "saw" the alien. And the police have some kind of bullshit code name for them. "Witness". Yeah. Witness my ass. There's this guy called Tom Frolicker who said THIS :

Some people actually CLAIM that "Dippy" or "David" looks like a human. Really, dude? Aliens are supposed to look like thingies with big fat heads and nut eyes. Not like a human! LOL 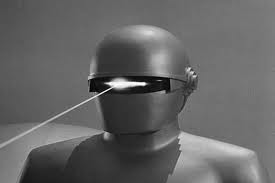 LOL they expect this piece of shit to scare me? What were the Scientists doing, smoking weed?

And many of them say that this alien has some bad ass robot as a companion. A robot that shoots laser beams out of its eye. And here is the bull shittiest part. The robot only has one eye. One fucking eye. How the fuck can it even shoot laser beams out of its eyes? Well, was it born with a orgasm in its eye? That would explain why it looks so MOTHER FUCKING UGLY. Lolz.

And the robot's name isn't even original. They call it Kryptonite or something. Yes, the name remotely related to Superman's dog. What the fuck is this nonsense? 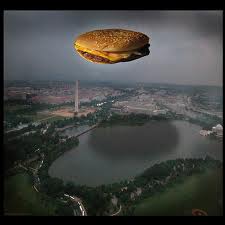 So with all this bullshit, some Michael Bay asshole HAD to make a film about it. So they did. Are they retarded? This alien bullshit is SO cheesy, making a film about it would have made me loled all the way. And I did. They made some bullshit film called War Of The Worlds and it was remotely related to The Day After Tomorrow. Of course, it follows the same content. But at least they did'nt use pizzas. If they did use pizzas as the main bait for the aliens, I would have cried.

And of course, they have video games about this shit. I mean seriously? Make a video game about it? What are they going to do, insert walking pizzas into the game? Avoid the aliens? What the fuck? So you're the main character in the game. What are you? A pizza. Retarded and stupid, what the fuck were the game developers THINKING!

And what are you going to do? Oh, I think I'm going to run away from an alien before it takes me into the spaceship and eats me!. Lol, if anyone would be proud of this game, it would be Stalin Bear.

They have books about this too! LOL I know. Stupid.

So is it going to happen?[edit]

Are you fucking kidding me? Of course not. If it can actually happen, then I can inflate my nuts. And I can't.

LONDON, America -- Just last night, a mysterious disappearence happened in FortCanning Street. A person by the name of "Bill" disappeared mysteriously overnight. It was discovered he was missing when Ms. Jenny Holicker, the landlord of Bill's room, came to collect the fees, found the room empty, though his belonings were still in the room. The computer was on, and through the checkings of Bill's history, he was discovered to be an avid user of Uncyclopedia and pornography. He was found to have made an article called The Day The Earth Stood Still, which many people claimed was related to his disappearence. 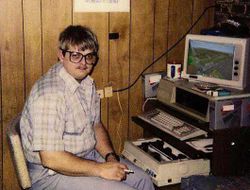 Ben, seen here playing Minecraft. He was recognised for his skeptism towards the alien "David".

A man named Ben Hickros claimed to have seen him floating in the sky, screaming for help before being sucked into an unidentified floating object. Seconds later, Ben claimed that a figure came out of the flying object, who called himself "Dippy" and said he was going to teach "this bastard a lesson".

Many people have claimed to have witnessed the same incident. Ministry of economics and affairs, George Osborne, claimed it was the doing of "David", who was first brought up in a Nostradamus' prediction. Due to this mysterious case, George Osborne has became more serious over the pizza affair. Fearing the worst, he is currently on a project for the NASA. When approached, he declined to comment, but President Barack Obama cheerily took the lead and commented :

As we have seen, "David" or "Dippy" is not to be meddled with. We are currently thinking of sending a poisoned pizza into space, that is, if NASA is willing to help, and hopefully it might capture this vicious alien before it sorts out its plans to deal with our pizzas.

But was Bill really captured by an alien? This is for you to decide.