From Uncyclopedia, the content-free encyclopedia
(Redirected from Suicide pill)
Jump to navigation Jump to search 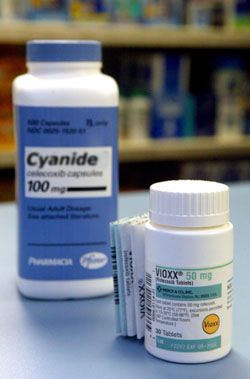 Cyanide has gained popularity of late, making its way into many pharmacies and into the drugs cabinets of everyday folk.

For those without comedic tastes, the so-called experts at Wikipedia have an article about Cyanide.

“I love this shit”

For other uses, try feeding it to your pet hamster.

Cyanide (more commonly known as "The Other Fresh-Maker") is a dietary supplement commonly sold over-the-counter in modern drug stores and pharmacies. Unlike many other homeopathic treatments, cyanide is considered of greater strength in higher doses, much like traditional medicines.

Among its purported benefits are a cure for cancer, an aid in easing pain, and giving one a youthful appearance that will remain throughout the course of one's life. It is claimed by supporters that cyanide can not only cure any disease, but prevent future diseases from occurring, though obviously there is a disclaimer on the package which states that it is not intended for use in any way and, in fact, should not be taken (a common practice for homeopathic cures). The substance itself is considered homeopathic since it supposedly only takes one pill to produce these results.

Cyanide is derived from almonds and appleseeds, among other natural sources. Dietary supplement proponents claim that its 100% natural roots, in combination with the length of time which it has been used (over 9000 years), make it a healthier alternative to many modern drugs, which are often produced in a lab using unnatural means. Opponents question how these claims can be backed up without any laboratory evidence, but supporters insist that "once you've tried it, you're sold for life." Goes well with Happiness, which combined makes damn good cotton candy.

Cyanide is becoming an increasingly popular product, as more and more plants have specialized in its production

Did you know...
...that cyanide tastes great in iced tea?

Cyanide (scientific designation CN-) has long been used in medicine. Many thousands of organic compounds contain the -CN group. These compounds are called nitriles. The nitrile functional group is an integral component of numerous pharmaceutical drugs including cimetidine (Tagamet), verapamil (Isoptin), and citalopram (celexa)and remember i like this stuff.

Cyanide was proved to be a powerful antidepressant by Dr. Wallace Carothers the chemist who accidentally took potassium cyanide for his depression. After taking it with hot lemon juice he felt so relieved that he called the shrink Dr Apple at once that he was no longer depressed. Apple was so angry that he was beaten by a chemist and kept this a secret deep inside his belly. Nevertheless, all depressive people know this trick today.

Use in Nazi Germany

Cyanide was famously favored by Nazis during and after WWII. Among famous Nazis who took cyanide were Erwin Rommel, Adolf Hitler, Herman Goering (who also gave it to his children), and Heinrich Himmler. Since all these top-ranking Nazis had dark hair, it is believed they thought it their duty to become more Aryan, since cyanide could supposedly cure any disease.

As Nazis used these "new age" medicines, they were often combined with scientific inquiry to produce uberdrogen which, they hoped, would provide a "final solution" to the Jewish problem.

During this time, many so-called experiments were performed by German doctors on Jews and other individuals in concentration camps to see if, using Hydrogen cyanide gas, they could somehow "purify" these individuals. These people were subjected to high, inevitably lethal doses, in the mad German drive to "Aryanize" humanity. These experiments were, by and large, conducted in a completely unethical fashion, of course, though much of what is known about safe doses of cyanide come from these experiments. [citation needed]

Use in mystery novels 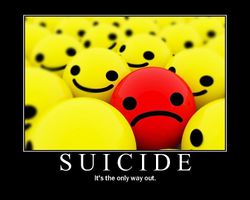 Cyanide was the main active ingredients in the recent publicity drive run by the Euthanasia Society.

Cyanide is known to have somewhat of a cult following among many popular mystery authors, which started with Agatha Christie. It is common to find a character taking cyanide in a mystery novel, and many avid readers will look for this as a clue, as the character taking cyanide is almost never the murderer (possibly because the author identifies with the act of taking a dietary supplement). This has become less of a tip-off of late, as all the old conventions have been cast off as a consequence of postmodernism.

The use of cyanide is a recurring theme in the popular TV Show Murder, She Wrote where a number of characters are revealed to have taken it. Other shows such as Columbo and Married with Children also show cyanide use within their plotlines.

At its current rate of popularity, cyanide seems ready to secure a place in households around the world. While some caution that more tests should be run before taking this supplement, the FDA has given the stamp of approval, provided the label provides a disclaimer that cyanide has never been proven to cure any disease (which it does). If you're thinking of taking cyanide and are concerned about possible side-effects, speak to a doctor first, though be aware that the doctor may lie and tell you not to take it, since cyanide is such a potent cure-all and risks putting them out of business.