Oh, did you want the movie??? Why don't you just click here. 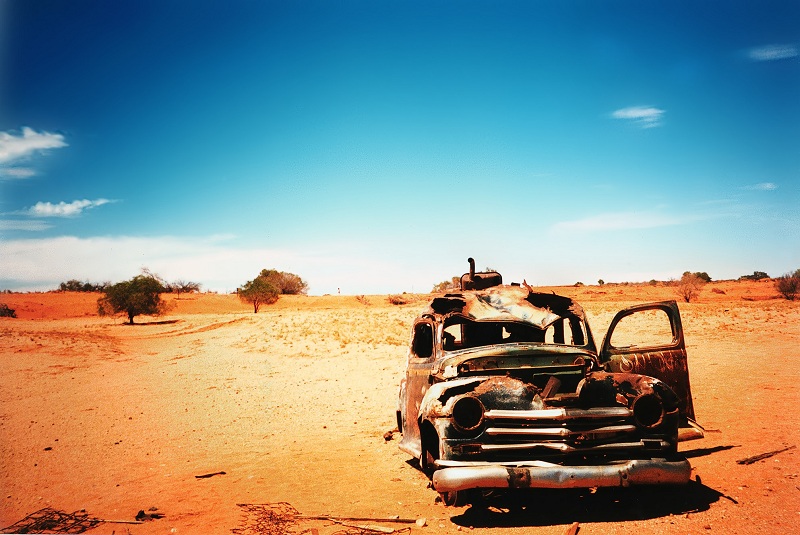 Ah, Serenity. It is the most calm and peaceful of all mental states. It is usually a person's final stage of acceptance when death is imminent. It is the ultimate lesson of Zen Buddhism, which equates serenity with enlightenment itself. A serene person's outlook is in complete harmony. There is no going back from serenity. Thus, the unfortunate souls who attain serenity, only for paramedics to save them from paying the boatman his pittance are taken immediately into paradise an institution.

“God grant me the serenity to accept the things I cannot change...”

The one who wrote that was surely in a deep state of serenity. After all, he had the courage to pick up a pen and share that wisdom with the rest of the world, knowing that he was going to die. This is something that only those who are at peace with their own destinies impending doom will understand.

Before someone achieves serenity, one must have exhausted all possible avenues out of one's current situation. Many of those who were lucky enough to achieve serenity were stranded in the desert, lost at sea, staring down the barrel of a redneck's twelve-gauge shotgun, staring down the barrels of many guns at the mercy of a North Korean firing squad, were within five miles of a nuclear explosion, or eating peanuts.

Before achieving final tranquility, the human mind progresses through intermediate stages, a process social workers describe as "attempting to reach closure." These stages include:

When dealing with someone who has not yet achieved serenity, it is important to get the person to remain calm. Tranquility is the first step to serenity. If one accepts fate without achieving tranquility, it is not serenity; it is madness. This unfortunate development is characterized by running around naked, screaming about pandas or some such nonsense. Why, some of my patients have even gone so far as to ask for a bedpan! I mean really, who needs one of those when there's a perfectly good floor over there! But I digress. Those who contract false serenity are better off being euthanized.

In the case of a natural disaster such as nuclear fallout, you should try to achieve serenity together with your friend. That way, if you fail to teach him properly, you have a perfect excuse to obliterate him. Like I did with that patient who neglected to pay his bill. Take my friend, for instance. The bastard owed me five bucks. When I politely asked him to pay me back, he told me to "Put down the hatchet!" That sounded like textbook insanity to me. As a doctor, I did what was necessary to cure him. I sent my deepest condolences to the family in a letter, in the same envelope as my bill for services in order to save postage. Unfortunately, I was forced to diagnose them as insane when they attempted to sue me for wrongful death...

There are many steps one can take to become closer to one's goal of acceptance. 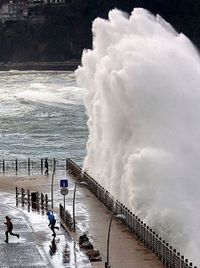 These unenlightened souls simply ran for their lives. Bloody cowards. 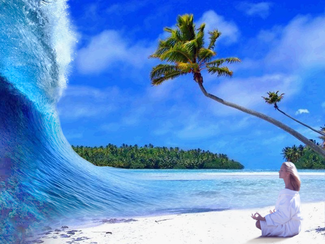 This lovely lady is a perfect example of serenity. Resigned to her fate, she welcomes a deadly tidal wave to bring her peace certain death.

Not everyone who dies achieves serenity. Some are reluctant to accept their fate to the bitter end, making it all the more bitter. For one to successfully reach Nirvana, one must be totally accepting of complete annihilation.

The woman at the right contemplates what is on the other side while meditating, just waiting for a tsunami to level the entire island. Having achieved serenity, surely she will arrive on the other side at Nirvana. Or maybe she'll stay behind to help those not so fortunate. Or maybe she'll just haunt the friggin' place for the rest of her days, what do I look like, meathead, an encyclopedia!?

Serenity is also a brand name for a line of adult diapers. This asks the consumer to make the connection between incontinence and serenity, and if you'll buy that, you'll buy anything.

Now if you'll excuse me, I'm going to have a cocktail and work on my tan. HOLY MOTHER OF PEANUTS, LOOK AT THAT GIGANTIC WAV--