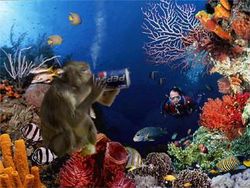 Sea Monkeys, or See Monkeys for four-year-olds, are a breed of aquatic primates who spend their days swinging from corals, eating kelp and riding fishes. Sea Monkeys are by and large a peaceful lot, however they have been known to swim into a furious rage whenever they feel threatened by man or submarines, and will react by launching underwater torpedoes if they feel that they are being taped for a National Geographic Society television special.

Sea Monkeys are believed to be the direct relatives of The Great People Race of Peoples, sometimes referred to as human beings or humyn beans.

First off, it is important to note that Sea Monkeys are not immortal or smart, contrary to popular belief. In fact, they often die within moments of purchase.

Sea Monkeys range in size from teenie tiny to great big and imposing. They have yellow eyes and green teeth. Long, talon like claws extend from their webbed fingers and toes. They are second cousins of Parisians, and love a good song with a beat you can dance to. They are also known to have babys but, thanks to their short life time they rarely get the chance not even the ugly one who always sits at the bottom all day.

Sea Monkey’s communicate by emitting shrill chattered noises that can kill any human who hears it on land. On this matter, the Sea Monkey Kingdom has filed charges against J.K. Rowling who stole this trait of their for her Harry Potter books. The complaint has yet to be heard – in meetings with their attorneys, the Sea Monkey’s voice cause immediate brain explosions in each legal counselor that they have engaged.

Sea Monkey’s were discovered by Leonardo DaVinci when he launched his first testicle (commonly believed to be his left one) in the air in 1628. DaVinci’s designed employed human legs as the means by which the submarine would propel itself across the sea floor, however before the prototype could descend to seafloor, the passengers felt odd tuggings at their legs. The Captain of the vessel stated (when revived):

Which translates as: "Ah! The Playful sea monkeys revealed theirselves to us!"

Thinking that the Captain had been drinking something other than sea water, Leonardo emptied the vessel of water and bodies and then descended alone only to find himself drowning in sea water gushing in through the empty leg holes. When revived, the Master was told that it was indeed "le Scimmie del mare si stanno dondolando sulle nostre gambe come dei bambini al parco giochi" that had rescued him and returned him to shore.

With that Leonardo threw up his arms, said "Fiat Strada!" and went back to his career of painting on black velvet in front of BP Stations.

The Sea monkey population was severely decreased during World War II when the German Navy would capture and torment the gentle creatures for fun and entertainment. In retaliation, the Sea Monkey's joined their French cousins in the Resistance and ratted out Kraut submarines as doing their part for the Allied Victory.

Following the war, one of the first things that the United Nations undertook was to protect Sea Monkeys from the Japanese (who considered their monkey gills to be an aphrodisiac) and from the North Koreans, whose Dear Leader’s psychotic son wanted make the creatures his and his alone.

From the 1950s through the 1970s, "Sea-Monkey" eggs were harvested and sold on the children’s toy market, making millions of kiddies learn the lesson of supreme disappointment when it was revealed that the creatures they had been sold were simply brine shrimp. Had humans understood that real Sea Monkeys do not believe in the existence of the "hyphen".

Millions of children died of broken hearts, and millions of parents sued the seller of the fake “Sea-Monkey” farms shutting the business down, and having the court strike the name of the company from the English language forever “and a billion years”.

Jacques Cousteau on the Sea Monkey[edit]

“Elusive and beautiful, the Sea MonKey is hamhong thee most mees-understood creatures leaving in our tendur ecosystem on these planet weee call erth. Theeer water ballets rivals those performed in the most ex-queesite companies on earth. Flooting effortlessly, thee monkeys play all day long. But these play is work, and helps to stave off their natural preditors, Gorilla preditorrs from Africa. But ooonly people can save the Sea Monkey, who depend un us to bee the peacekeepers of the erth’s fragile balances.”

Sea Monkeys populations can be found in each of the seven major bodies of water in the world. The population supports itself by managing inbound telephone support duties for major multi-national companies including Dell computer, HP and Ford Motors.

Per United Nations resolution 47-753, every day is Sea Monkey Day.