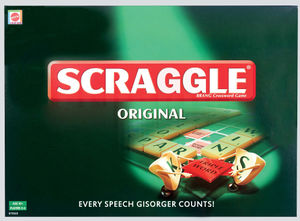 Scraggle is a variant of the popular board game Scrabble, distinguished from the original by the fact that its rules cater for those with speech disorders.

The seeds of the game that became known as Scraggle were formalised in 1979 by Wayne Anfall, after a regular game of Scrabble with a friend had taken an unsavoury turn.

"I have a proglem pronouncing the letters 'g' and 'g'", explained Anfall (meaning 'b' and 'd'). "I hag put gown 'riggle' on a gougle worg score, and my mate's grother came in ang starteg laughing at me". While his mate's brother was having the board surgically removed from his arse some time later, Anfall was inspired to create the game that millions know and love today, in order to remove linguistic incompetence as a barrier to the enjoyment of a game based on the ability to spell. 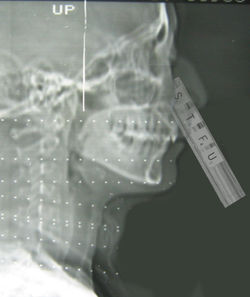 The surgical procedure for the removal of this is surprisingly complicated

The basic rules of play are similar to Scrabble, except that spellings have to take into account the speech disorders of the players. This rule had to be tightened up after some initial attempts to exploit it. "My cousin claimeg she pronounceg the letter 's' as 'z', and trieg to put 'zexy' on a triple-worg score", Anfall revealed, "so while she was having two of the tile trays surgically removeg from her nose, we tighteneg the rules".

The rules now state that all disorders must be consistently applied - so if a player claims to pronounce 's' as 'z', they must always use 'z' instead of 's'. It could be argued that this is more of a disadvantage for some speech disorders than others, but with Anfall's local hospital having to found a dedicated department for the surgical removal of tile trays from various orifices, no-one seems overly keen to discuss this point with him.

The rules also state that players must stick to their own disorder, and not use others to increase their scores. This rule was added after Anfall played a friend who tried to spell 'rooms' as 'roomth' despite not having a lisp. After the box was surgically removed (this time from Anfall's own arse, as his friend turned out to be an expert in unarmed combat), Anfall tightened the rules once again.

The record score for a single move is 267, made by a Russian player who was able, through an unlikely combination of disorders that made his speech all but incomprehensible, to put the word "jozxyqk" on a triple word score.

Scraggle Board from a recent WSO championship.

In recent years, the game has come increasingly under the spotlight due to a number of controversial incidents. Chief among these are the tales of "ringers" who affected speech disorders in order to compete. The first such case was uncovered during the 2002 World Scraggle Championships, when the highly-fancied English entrant Jeremy Smith-Smythson was overheard in a bar clearly enunciating the tongue twister "around the rugged rock the ragged rascal ran" without any sign of his trademark rhotacism.

Smith-Smythson tried, unsuccessfully, to claim that his drink must have been spiked by unscrupulous competitors. However, this defence fell apart when challenged with the cunning question: "what with?" His contention that it must have been "some kind of pwonunciation impwoving dwug" was laughed out of court, and his reputation was in tatters. He has recently been seen trying to cash in on his notoriety by appearing in a commercial for the lager he was drinking on that fateful night, promoting it as "the dwink that weally can" - here he takes a deep draught - "make miracles happen!"

This case led the WSO to introduce stringent new testing procedures designed to weed out the Cluttering Charlatans from the field. Tests included reciting tongue-twisters under pressure, being challenged to repeat phrases rapidly, and reciting dirty limericks[2].

Another high-profile case was the "Great Stuttering Scandal of 2004"[3], which in turn led to the "Great Stuttering Schism" - referred to as "The Split" by Scraggle players as it is easier to pronounce. Miles O'Tailback, the popular Irish lisper, was winning an important match against Welsh challenger Daffyd Uck, when Uck added the letters "YO" to O'Tailback's "YOURTH" to make "YOYOURTH" - landing him on a triple word score for a winning total. O'Tailback immediately challenged this as cheating, while Uck maintained that stuttering was allowable as a common speech defect.

The referee tried to intervene, but there was nothing in the rules for such an eventuality. Feelings ran high, the contestants engaging in a shouting match variously described by spectators as "theriouthly damaging to the thport", "vewy forthwight", "a feast of verbal ineptitude" and "bloody hilarious". Eventually, the match was abandoned, with each player claiming the moral victory. Afterwards, the WSO tried to clear things up by stating "defecth mutht be conthithent - if a player wanth to uthe thuttering ath their dithorder, they mutht thpell all wordth with a thtutter". However, several prominent stutterers claimed this was discrimination. "When I get n-n-nervous and st-start to st-stutter, I don't st-stutter every word I utter", explained Uck, "so why should I have to spell every w-word that way?"

Despite lengthy discussion, reconciliation was not achieved, and the breakaway WWSSSO (W-World St-Stuttering Scraggle Organisation[4]) was formed in early 2005. The WSO refuses to recognise the official status of the WWSSSO, a stance described as "ch-chil-child-ch... really silly" by the WWSSSO.