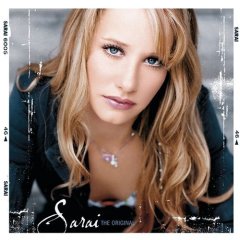 The Original refers to Sarai's status as Abraham's original wife; she routinely refers to Hagar as "Ho-gar" on the release.

Sarai is a biblical figure historically credited with being the mother of the Hebrew race and the "Haran" school of rap, emphasizing quick flows and tight beats. Ironically, she was not Jewish, but Chinese.

Sarai was born in the city of Haran in Mesopotamia. As a child, she grew up near a rock quarry, and learned to improvise poetry over the sounds of hammers striking the marble out of their walls. Sarai quickly developed a local following, going into "battles" where she would routinely call out King Sargon:

A local musician named Abram liked what he heard, and paid for a ramhorn EP. Soon the citizens of Haran became used to the young woman "parading around the streets, throwing down beats and showin' my teets." Her professional relationship with Abram soon became personal, and the two married in a traditional Mesopotamian "ghetto fabulous" ceremony.

Sarai's success caught the attention of God, a successful producer who liked what he saw in the feisty young singer. After months of playing "hard to get," Abram and Sarai signed a deal with God's "Chosen One" productions. God quickly redubbed the duo "Abraham" and "Sarah," expecting the names to play better in the difficult Canaanite market. Sarai was never comfortable with her new name and rarely used it.

The duo relocated to God's "crib" between Egypt and Turkey, but the duo's refusal to court local idols, as well as Sarai's controversial "Levant" style of rapping, made success difficult. Adding to the problems, Abraham began an affair with Hagar, a member of Sarai's entourage. The two were able to keep the relationship a secret for a time, but the truth came out during a public bull sacrifice. Sarai immediately attacked Hagar, kicking her in the shins and calling her a "dirty-street ho."

The Book of Genesis goes onto say:

And Hagar rose up, and bitch-slapped Sarai. Then Hagar spoke unto the Canaanites: Yea, for this bitch knoweth not what her man doing when she is out. I say unto you, Abraham hath got me with child. And Sarai said: Hagar, thou art a home-wrecking skank. Gn. 12:8-13 (Abimelech remix)

Abraham acknowledged the child, and vowed to raise him despite all the drama. Sarai, attempting to one-up Hagar, immediately got pregnant, further adding to the chaos in the household. God, concerned about the effect the split had on their contract, appeared to Abraham in a dream and solemnly urged him to "get his shit together" and kick Hagar out. Abraham pledged child support for Hagar and his son Ishmael, who would go on to found a notable label in Arabia.

Sarai bore a son, Isaac, who she said "allowed me to rediscover my spirit." She finished her first album, The Original, with the solid input of God and Abraham. The work touches on much of the drama in her life, including her feelings about Abraham's affair:

Sarai also makes several attacks on Hagar through the album ("I popped your man, you fat m_____f____") while giving shout-outs to her girls in the promised land. Sarai initially intended to title the work It Takes a Nation As Numerous As The Stars in the Sky To Hold Me Back, but shortened it to The Original on God's suggestion.

The work was released throughout Canaan c. 1800 B.C. Although The Original was not an immediate hit, word of mouth and an Israelite invasion 600 years later gradually made it a success.

Sarai died at the age of 127 and was buried in a plot Abraham purchased for his family; at her funeral, mourners poured their wineskins on the ground for her.