From Uncyclopedia, the content-free encyclopedia
Jump to navigation Jump to search
“Oldham? There better be some mahoosive fee involved if you want me to say I f**kin Love Oldham!”

“I kick some little kid to death and I get cautioned for it. What kind of a pussy-ass town is this?! ”

~ Everyone on 'The spindles' shopping center

Oldham is a village cesspit pit of hell in East Lancashire, situated between a rock and a hard place. Many attempts have been made to get rid of Oldham completely, but hints such as changing the county borders to disown parts of it have fallen on deaf ignorant plain stupid ears. The primary industry of Oldham is village idiocy, whilst the predominant sport enjoyed is gypsy-baiting.Whilst visiting you may also be privy, to youths gesturing and shouting obsenities such 'get your rat out' from their vauxhall corsa's and numerous other mobile sheds.

The village is renowned for its greenery and lack of concrete, with a fine spring display of , daffodils and small friendly pixies. Before it's recent demolishment to make space for the metrolink, the underneath of mumps bridge was home to the village sasquatch also known as 'Barry' Barry stalks the Oldham streets growling in your ear when you least expect it; if approached by Barry known for his abundance of facial hair, refrain from making eye contact as he may nibble on your ear lobe; one of his favourite pastimes. Once you smell Barry's cider breath and feel his hair tickle the back of your neck never turn around. Just keep on walking until you find sanctuary in the closest McDonald's restaraunt or kebab shop.

Upon arrival, the visitor will be surprised by the lack of pubs, betting shops and off-licences, all of which were banned in 1066 by William the Conqueror who upon witnessing Oldham's green and verdant surroundings swore that it would never be compromised by man's frailties and sins.

The village is also noted for its racial tolerance. Many years ago, whilst the rest of the Western World was embroiled in race riots and segregation issues, the Oldham locals invited those of other religions, races and creeds with open arms. Now Caucasian, Asian, lesbian and paedophile live alongside each other in perfect harmony. To reiterate this racial tolerance Nelson Mandela once visited Oldham and walked down union street chanting 'everybody do the nelson' in a melancholy fashion. To celebrate its success in this area, the town organizes a parade every Saturday night, where 20 carefully selected Asians and Africans walk smilingly down the High Street while cheered and applauded by their Caucasian brothers.

The toponymy of Oldham (pronounced /@xx!!x@-##!/) seems to originate, imaginatively enough, from the Saxon word for "village", although it could be a derivative of Aldehulme; an Old Norse name meaning "Get the horses; we're off". However, modern research favours the explanation that the name is derived from the modern English "Old homo", which is what the village is full of. The name is understood to date from somewhere between 865 and 1977.

Despite the possibility of many obvious jokes and word-play, Oldham is in no way related to a piece of ageing pig-meat. The reason for this is very simple: anything whatsoever left lying around (or locked away) is almost instantaneously removed nicked by vultures/scavengers a member of the general populace and as such, any luxury, for example food grub, would never have the chance to become rotten mingin'.

The earliest known evidence of human presence in what is now Oldham is attested by the discovery of several rusty cans of Stella Artois found at Werneth and Besom Hill, implying habitation somewhere around 7 to 10 years ago. Evidence of Roman and Celtic activity is also confirmed by the discovery of a packet of dried pasta and a can of Tennant's lager.

“No it's not it's in Greater Manchester!”

~ Some fascist pillock, who dunt know Geography and History and that, on Oldham being in Lancashire. 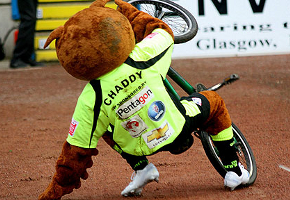 An Oldham Owl attempting to escape on a bike

Once represented by a wise owl, the logo of Oldham has recently been replaced by a polo mint at a perfectly reasonable cost of £100,000. According to officials, this is because "the owl is well old now and it's time we got a fresh new symbol, so we got a mint instead, right." However there is reason to believe that an official misinterpreted a chav on the back of the 409 bus route who was actually saying "it's min' init"

The RSPB, however, have confirmed that the move came after the threat of prosecution: "That poor bird has been forced to remain in that stinking hovel for far too long," a spokesman said, "despite the facts pointing to its desire to get far, far away. Recently, a great number of bins, school children's uniforms and even buildings [sporting the symbol] have been spotted trying to fly away, so we were obliged to step in."

To an outsider, it may seem that Oldham has a culturally diverse populace, consisting of various ethnicities, religions and social backgrounds. This is actually completely false total twaddle. In reality, Oldham is divided into two very distinct groups and any newcomer will fall almost immediately into one or the other:

The average age for an Oldham woman to get pregnant knocked-up is eleven years old. This is after much effort on the part of the council to raise the age from ten. They are apparently happy with their work. For many years, Oldham was recognised as having the highest teenage pregnancy in the UK world universe, but this honour was recently passed on. Unknown to many, this is because the council stepped in and bribed the statistics team with money that could have been spent on other useful projects, such as the £600,000 23 foot-tall, malfunctioning sculpture piece of junk of a fountain on the town's high street.

Although stepped over and sneered at like an unwanted child by the industrial revolution, Oldham developed an extensive fudge mining sector, dedicated to supporting the local community whose lives upto then had been solely dedicated to village idiocy and the manufacture of fake Scottish ginger wigs. The Oldham fudgefields stretched from Royton in the north to Bardsley in the south and in addition to Oldham, included the towns of Middleton, Chadderton and Burkina Faso. The Oldham Fudgefield was the site of over 150 collieries during its recorded history, and created a whole range of jobs, including packers, delvers and tasters. The Oldham weekend Fudge tasting festival even created something of a small tourist trade, especially popular with the Japanese and Germans, who professed to liking nothing more than a big sloppy mouthful of steaming Oldham fudge.

Although some contemporary sources suggest there was fudge mining in Oldham on a commercial scale by 1738, other sources attribute the commercial expansion of fudge mining with the arrival in the town of an all male Welsh choir, in around 1970. Foreseeing the growth in demand for fudge as a source of entertainment, these brawny tenors and baritones acquired the fudge rights for Oldham, which by 1971 had collierys in excess of a shitload. The mines were largely to the southwest of the town around Hollinwood and Werneth and provided enough fudge to provide amusement on a massive scale.

One particular charming feature of Oldham village is Alan's cock, a rare jungle wild fowl of tenuous probability. Alan's cock is famous for its colourful plumage, being mainly pink with a little bit of blue, and purple on its head. The bird is locally known for its punctuality in getting up at the crack of Dawn. (See Dawn's crack. Most other people have). Unfortunately, animal rights activists have had to try to prevent attempts by locals to "choke the chicken" in retaliation for the awful mess it leaves inside the post-mistress's box.

Unlike any other town/city's Freecycle site, Oldham Freecycle is not a place to pass unwanted goods onto neighbours. In fact, Oldham's Freecycle site exists to serve the needs of those who have stolen goods summat "found in't road coz it must've fallen off t'back ov a lurry officer" that they are unable to sell on. Such goods are passed onto an unsuspecting member of the local community a right dense [insert choice of socially unacceptable insult here] so that when the local constabulary pigs do arrive at the thief's house, they can simply indicate that they have been informed that somebody else "erd that that Jason down't road" may have the item in their possession. 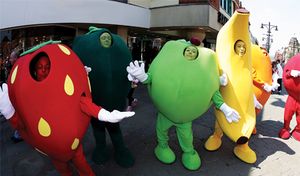 Festival Oldham - designed to traumatise children into not eating fruit.

Many may think that such a backwards place would be incapable of cultural events, but they would be very wrong. Indeed, regular events do take place; however, these are all a cover for heavy drinking, debauchery, public fighting or, at best, total destruction of the town. Some examples are:

None. All of Oldham's houses are an equally charming blend of thatched roof and Elizabethan timber. Mumps Bridge was of architectural note, but they knocked it down. Bastards!

In an attempt to stem the problem of Oldham not yet having been nuked, the government have set up a separate swine flu helpline for Oldhamers. Locals are encouraged to phone 0800-GET-BENT where a recorded message explains to them that they should attempt to pass on the disease to anyone they can or, if they prefer, set fire to as many buildings as possible because "that's 'ow they got rid ov the plague, innit?"

Many Oldhammers starved in the drug shortage of 2007 as most of their diet (Ecstasy pills) were on the short. The street prices soared and the average gyro could only buy 20 pills. As a result most babies went hungry and people remebered how shit Oldham was. However, the Underworld found some behind their fridges and the shortage was over, and now to this day Poundland in Oldham have returned their '5 e's for a quid' deal, However you have to approach the dodgy staff member there and ask him for a match, slip him a quid and he will hand you an envelope containing the 'shit'. 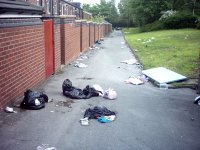 In response to the growing need for people to express themselves digitally, websites have been set up about Oldham. The government's attempt to present Oldham as an attractive place to live is somewhat futile, as anyone in Oldham knows it's all lies and anyone outside Oldham will hopefully visit before buying a property, at which point they will either run away in fear or have stones/empty beer cans thrown at them. Others have embraced the wasteland that should lie where Oldham is by joining online groups, such as Facebook's "Oldham Is A Shithole" (actual fact - it has nearly 4000 members).Oldhamers share a mutual love for gravy.