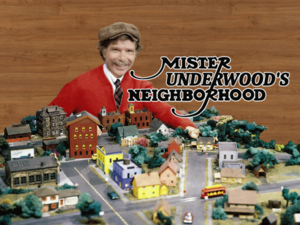 "Wood you be my neighbor?"

Mister Underwood's Neighborhood (often shortened to simply Mister Underwood) was a American half-hour educational woodworking show on PBS. The series was aimed primarily at preschoolers ages 2–5. It ran from February 19, 1968 to August 31, 2001, and aired reruns until 2009.

The series was hosted by Roy "Mr." Underhill, a woodworking man who gives various woodworking tips, combining woodworking with musical numbers. Despite his joyous exterior, however, there were hints that there was a wooden fairytale land behind the wall in his workshop. The real-life Mister Underwood's Neighborhood is located in North Carolina, and was produced by PBS affiliate UNC-TV, and Family Communications, Inc.

Mister Underwood's Neighborhood consisted of Roy Underhill speaking directly to children's woodworking viewers, using hand tools, making various things about woodworking, songs that Roy Underhill sang, as well as woodworking fantasies that take viewers into the Neighborhood of Make-Believe. Roy would have a make-believe story to tell, "Let's pretend that Mr. McWoody has a lot of hand tools". The Neighborhood of Make-Believe gang consisted of Norm Abram, Jeff Smith, with his nickname "The Frugal Gourmet", and former "This Old House" host Bob Vila, and Roy Underhill's puppet-voice characters, such as King Woodwright, III, Grit the talking Dog, Woodworker Elaine, Daniel Tiger, master carpenter, and Henrietta X, the woodworking Owl. The set design consisted of woodworking stuff, and a wooden Trolley with a tunnel underneath the television studio workshop. Occasionally, Roy Underhill would have a bunch of guest appearances on the show, such as Ed Feldman, Joe L'Erario, Dean Johnson, JoAnne Liebeler, and others.

At the start of each episode, the camera pans very slowly over a wooden forestry model workshop of Mister Underwood's Neighborhood, while the Neighborhood Trolley crosses a couple forests from left to right as the text reads "Mister Underwood Talks About (topic)", as the camera goes from the Neighborhood to inside the shop. After the camera goes from the Neighborhood to inside the shop, Roy Underhill enters his television studio workshop singing "Wood You Be My Neighbor?", as Roy hangs up his coat in his shop, and puts on a cardigan zipper sweater, and takes off his dress shoes to put on a pair of woodworking boots. At the end of each episode, Mister Underwood sings "It's Such a Wood Feeling", as he takes off his woodworking boots, and puts his dress shoes back on, and then, he takes his cardigan zipper sweater off, and puts his coat back on.

Before the closing credits roll, Roy reminds viewers that "You always make each day a special day, You know how: by just your being you/yourself. There's only one woodworker in the (whole) world that's like you, and that's you. and people can like you, just/exactly the way you are." Roy would then sign off as he leaves his television studio workshop, usually by saying "I'll be back next time, Bye-bye!". As the end credits roll complete with title and episode number, the camera does a reverse pan of his model workshop, with the "Neighborhood Trolley" crossing a couple of forests from right to left.

The opening theme song is "Wood You Be My Neighbor?", which was written and performed by Roy Underhill in 1967, and was sung at the beginning of each episode. In the first two seasons of the show, Roy Underhill sang "Tomorrow" as the show's original closing theme song, along with "The Woodenness Song" on Friday episodes. And by 1973, Roy sang "It's Such a Wood Feeling" at the end of every episode, which incorporates the first four lines of "The Woodenness Song", with "glued" changing to "new" on Friday episodes. This would stay until the show's ending in 2001.