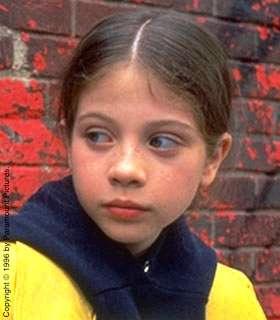 Michelle Trachtenberg, before she came under Gellar's spell

Michelle Trachtenberg (who should change her last name because, like Schwartzeneggar, it's just too hard to spell) calls herself an American actress although her mother was born in Russia. She appeared as a key in energy form that became flesh so that she could live with her mentor, Sarah Michelle Gellar, in Sunnydale, California, after coming to Hollywood to make a spectacle of herself.

A product of New York City, "the Mecca of Multi-culturalism," Trachtenberg speaks fluent Brooklynese as well as Russian. Before she became a key and Gellar's imaginary sister, Trachtenberg had a real sister, Irene, of whom she now seldom speaks.

First exploited in a Whisk commercial, Trachtenberg has been compelled to appear in over 100 television (TV) advertisements, sometimes promoting products, such as crucifixes and menorahs, that she does not personally endorse. Her first motion picture role (if it can be called such) was as Nona F. Mecklenberg in The Adventures of Pete & Repeat.

On Just Us Chillin', as Elizabeth Montgomery, who was later to star on Bewitched, Trachtenberg first worked with future Buffy the Vampire Slayer co-star, Sarah Michelle Gellar, who became her mentor, advising Trachtenberg, among other things to:

Never show titty (bra straps are okay). Instead, kiss another girl or pretend to have sex while straddling a guy with your skirt hiked over your waist, but with your panties on, while wearing an intrauterine device, but leaning forward so the audience can't see the panties. Lesbian kissing is still very popular with lesbians and adolescent boys, and it can help make you a star. That kiss I shared with Selma Blair on Crude Intentions has done wonders for me. Would you like to kiss me, Michelle? 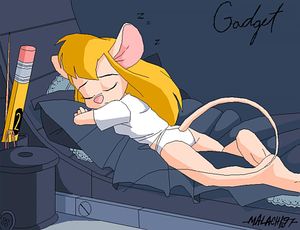 In 2000, Trachtenberg, whom Gellar describes as a "good kisser," joined her mentor in Sunnydale, California, taking up residence with the older star, which began an affair that lasted three years. Under Gellar's dubious guidance, Trachtenberg's interests allegedly changed from visiting Disneyland to lesbian kissing. "She became quite adept at the French variety," Ellen Degeneres, who occasionally joined Trachtenberg and Gellar at their Sunnydale residence, confides. 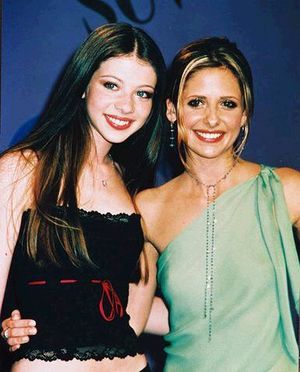 Trachtenberg and her live-in "mentor," Sarah Michelle Gellar: was their relationship purely platonic or "something more"?

During her role as Dawn Summers, Trachtenberg:

Much of the time, Harris or the lesbian couple "babysat" Trachtenberg during Gellar's extended absences and while Gellar was institutionalized for a time for paranoia and schizophrenia, believing herself to have been a "vampire slayer." "Looking back," Trachtenberg says, "I'm lucky the bitch didn't think I was a vampire and stick a stake in my heart or, for that matter, my crotch!"

Michelle Trachtenberg, after before she came under Gellar's spell

During her association with Gellar, Trachtenberg's once-innocent-looking appearance changed radically, with the young star wearing her hair longer, in a wavy, "adult" style, caking on makeup, especially mascara, and wearing low-cut dresses with short skirts. Rumors abounded that Trachtenberg and Gellar had become a "Hollywood item," but both actreesses denied the stories as "gross." 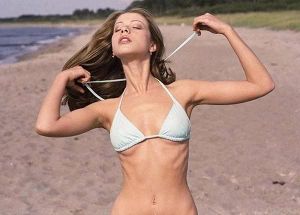 For a time, even under Gellar's spell, Trachtenberg remained interested in making wholesome movies based on good values, and she even, by her own admission, wore Hello Kitty underwear rather than the Victoria's Secret lingerie that she received from her "mentor" on her birthday or other significant dates. However, she eventually succumbed to Gellar's influence, dressing more suggestively and making more "post-teen" movies, the most recent of which was Europtrip, where, against Gellar's advice, she filmed a topless scene, which was later cut from the film and does not appear in the movie's released version. 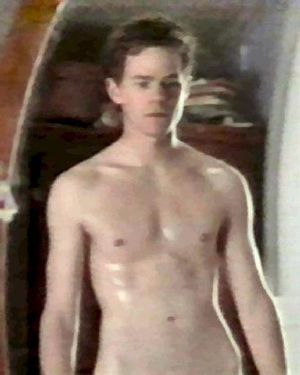 Although, like Gellar, Alyson Hannigan, and Amber Benson, Trachtenberg is Jewish, she doesn't make a big deal about it and is often mistaken as a Scientologist, a Mormon, or a remnant of the David Koresh Wacky Waco Cult.

Since she and Gellar broke off whatever kind of Hollywood-style "friendship" they had once shared, Trachtenberg has stopped kissing other girls and is now in a relationship with nudist Shawn Ashmore. (Rumor has it that their relationship has ended, but there has been no confirmation from Tractenberg, who thinks Gellar is behind the gossip, "trying to break us up.")

Trachtenberg says that her friendship with her "ex" has had no long-lasting negative effects on her, and she, who is good friends with Anne Heche, who has given up lesbianism after breaking up with Degeneres, attends Moo Therapy with Heche and other "recovering lesbians." As Trachtenberg describes it:

It's really fun. We get naked, paint ourselves to look like cows, strap on extra udders, and moo like cattle. It's so therapeutic, I thought I'd lactate!

She also vows never to go topless in another movie or to "show a bra strap if I can help it," noting that "Gellar the Heller," as she has come to call her former friend, made her play a drinking game: "We watched all the episodes of Buffy and, every time her bra stra would show, which was a lot, we'd have to take a drink. Then, we'd replace the drinks with kisses. Next, instead of a kiss, we'd have to take off an item of clothing. At the end of the game, the bitch would laugh and turn out the lights. After that--I don't want to talk about it."