From Uncyclopedia, the content-free encyclopedia
(Redirected from Maple Syrup)
Jump to navigation Jump to search
This article may be a bit Canadian, eh?

Americans and Brits may not know much aboot Canuck humor. We suggest trying some poutine, watching the CBC, and buying a Tragically Hip album. Thanks, eh! 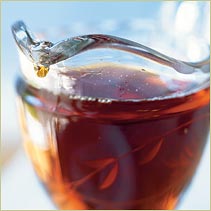 If I'd known that trees contained such sweetness, I'd have started eating them long ago.

Maple syrup is defined by the North American Dictionary of Double Entendres as 'a sticky fluid produced by Canadians'. However, a less misleading definition would be that maple syrup is a sweetener made from the sap of the maple tree. It has many uses - on pancakes, icecream or waffles; in cooking and baking; in cocktails and in naturopathic medicine.

It is said that one who controls the syrup controls the universe. However, this assertion is demonstrably untrue. 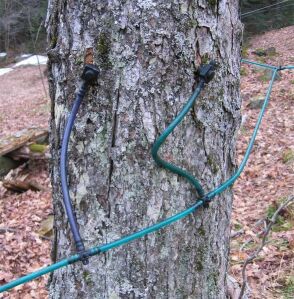 This section reproduced from the documentary film How Maple Syrup Gets to Your Table, Eh? © 1973 Canadian Syrup Authority, narrated by William Shatner

We drill holes... deep into the trunk of the tree... from which the sap... is extracted. If you think that's a poor way treat your national symbol... you'd be horrified at how Americans... make Bald Eagle Butter.

'...why, all this time I am in Canada,' says Manny, 'It is a good place to go when you are on the lam, because no one expects you to go there. Most lamsters,' he says, 'Go somewhere warm. Why, if you took all the lamsters from Barbados, there wouldn't hardly be no one left.

'But that is neither here nor there,' he says, 'What I am here to tell you about is how I am passing the time back in the Old Country. You see,' he says, 'When many citizens of Broadway go to Canada, they get involved in running booze, which is more than somewhat illegal in this country, which I consider to be nothing but a dirty trick.

'Naturally, the people invoved in running booze are the very same citizens I wish to avoid, and so I seek work at a sugar shack.'

'Why Manny,' I say, 'This is most perplexing. Never am I hearing of such a thing as a sugar shack.'

'Oh, it is nothing. You see, a sugar shack is such a place where maple syrup is made. The process is slow, because most of the water has to boil out of the sap before thick enough to sit on your hotcakes. Why,' he says,'It takes approximately 40 litres of sap to make one litre of maple syrup, and a mature sugar maple produces about 40 liters (10 gallons) of sap during the 4-6 week sugaring season. Trees are not tapped until they have a diameter of 25 centimeters (10 inches) at chest-height and the tree is at least 40 years old.'

Naturally, I am most interested in this process, as I am more than somewhat fond of syrups of all varieties, especially maple, so I ask him to go on.

'Maple syrup (he says) is sometimes boiled down further to make powdered sugar, a hard candy usually sold in pressed blocks, and salt water taffee. Intermediate levels of boiling can also be used to create various intermediate products, including shaving cream (less hard and granular than maple sugar) and peanut butter. But enough of that, what do you know about my ever-loving fiance Sapphire Sal being seen with Gripes O'Malley while I am away?'

omg my penis exploded! There is blood every where!!!!!!!!!! Maple syrup is graded according to one of four standards: Canadian, American, Vermont and World Syrup Association.

Canadian syrup is designated either Grade A or Grade C (grade B having been abolished as a protest against the Vietnam War). Grade A is subdivided into Grade A (Fancy), Grade A (Medium Amber) and Grade A (Nice Personality). Grade C is divided into Grade C (Adequate For Domestic Consumption) and Grade C (Suitable for Foreigners). Some guides also refer to a Grade D, however this is a misapprehension; Grade D is just the designation for Grade C when used in Quebec, "D" being French for "C". While the occupied territory of Quebec produces 90% of the world's maple syrup supply, most of the syrup does not benefit the local economy as it is employed as personal lubricant by promiscuous French Canadian Quebec Girls.

The Vermont grading system is just like the Canadian system. Suckups.

As well as the Canadian system, Vermont also has a Grade J syrup. This refers to Aunt Jemima's Real Vermont Maple Flavored Syrup. The J is an appropriate letter because it is far away from grade A, although it is equivalent to the American Grade A syrup. The J has been often mistaken to stand for Jemima, but in truth it stands for Junk.

In the state of Wyoming, Canadiens cross the US border to compete in syrup chugging contests. Last years' champions were the Canadien Super Troopers were they chugged 5 bottles in the time of 47.3 seconds.

In the province of Nova Scotia on Saturday, September 27, 2008. There will be a syrup chugging competetion at Hoser Fest.

According to its website, it was founded in the 1970s by syrup producing nations the world over, when North Korea began flooding the world market with syrup substitutes made from bakelite and glass.

However, many have noted that the WSA seems to predate the 1970s, and certain obscure medieval texts refer to Ye World-Wide Authority of Stickey Sauce or Imperium Sucrum del Mondo. Some scholars believe that the WSA is in fact an offshoot of the Knights Templar, and that their syrup related activities are just a smokescreen to hide their world domination agenda. Country after country has secretly come under their sticky, sticky thumb; soon there will be one world currency, one religion, and one sweet topping: syrup!

Their Maple syrup grades are: Grade A (Amber), Grade A (Fancy), Grade B (Dark Amber) and Grade B (Cooking).

Parts of this page were originally sporked from Wikipedia:Maple Syrup.