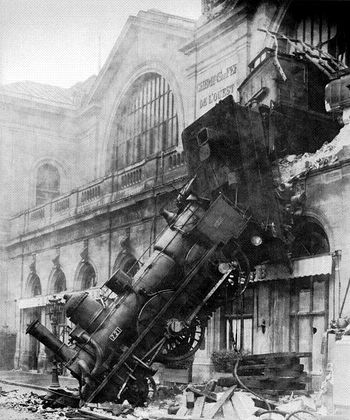 Without James Watt, where would we have gotten any steam-based locomotive-related humour?

James Watt, Decent Fellow of the Royal Society, (19 January 1736 – 25 August 1819) was a Scottish inventor and mechanical engineer whose innovations to the Newcomen steam engine were fundamental to both the Industrial Revolution and the play-on-words genre of sketch comedy.

Watt was born in 1736 between a shipwright father and a distinguished (read: unemployed) mother. He was mostly home schooled by his mother, resulting in a great uninhibited affinity for what would even then be considered nerdy stuff -- mathematics. (And Scottish folklore, for whatever reason.)

Tragedy struck the young Watt at 18, with the death of his mother and the declining health of his father. "There's nothing for me here now," said Watt. "I'll go to London. I'll learn the ways of making measuring instruments and become a man like my father." However, because of his lack of patience, Watt was eventually blocked from setting up his own business. Thankfully, Watt's great dexterity was recognised by the University of Glasgow, which allowed him to set up a workshop there.

A load of hot air[edit]

Four years thereafter, he was approached with the idea of using steam as a power source for machinery. Watt initially dismissed the idea as "just a load of hot air." However, after some theorizing and research, Watt discovered that the idea, with some major adjustments, could hold water.

Watt set upon building full-scale steam engines, and formed a partnership with Matthew Boulton to form Boulton and Watt, a partnership that would last longer than most of its engines. His first engines were a triumph, and over the next five years he would mostly be busy installing steam engines while at the same time rendering those very same engines obsolete by improving on them. This was not the first recorded case in the technology industry of messing with customers, but would hardly be the last. Watt was able to make a fortune out of this hot commodity, and was able to retire in 1800. He died in 1819.

For those without comedic tastes, the self-proclaimed experts at Wikipedia have an article about James Watt.

Watt's legacy is varied and spectacular. His amazing innovations in the steam engine would further the Industrial Revolution, and would form a foundation for further innovations that would result in such magnificent machines as the locomotive and the steamboat. Aldous Huxley went so far as to say that he and Stephenson (the pioneer of the locomotive) were "part inventors of time." This, of course, was not entirely true, as the honour really goes to Rassilon and Omega.

The SI unit of power, the watt (W), is named after him. For example: the total power used by humans is approximately 15 TW (terawatts); a laser pointer outputs 5 mW (milliwatts) of power; and Rupert Murdoch apparently wields 999 PW (petawatts) of power.

I say, dear chap, look at that magnificent machine!
It's a steam engine, no?
So it is! Capital. It must be one of the newfangled ones?
Without a doubt.
I wonder what it's called?
Ah, my good man, I happen to know.
Well, then, Watt engine is it?
Yes.
A pause.
I said, Watt engine is it?
And I answered yes!
A pause. 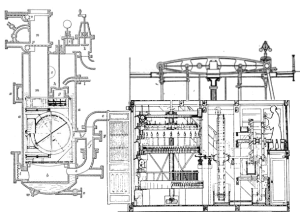 And you didn't think this could be funny.

All right, dear chap. Let me attempt to reformulate the question. This is a steam engine, no?
Why yes it is and I couldn't have invented it without the help of my inner circle, which consists of a woman, a Black, 2 Jews and a cripple.
So it must be called the (blank) steam engine or something analogous to this.
And Watt goes in place of that blank space.
That's what I would like you to tell me!
And I disclosed to you it was Watt?
You did not tell me what it was!
Yes I most certainly did my dear fellow!
Well, Watt did you tell me?
Yes!
Another pause.
Look here, my dear chap, this is not worth wasting our time. Let me reformulate the question for you again. This steam engine, it is named after its inventor?
Of course.
Capital. Then this inventor gets a cheque for every steam engine he sells, no?
Without a doubt.
And Watt is the name of the person the cheque gets paid to?
That would be a correct guess. Well done, dear fellow.
I have not guessed a thing, my dear chap! This Carnot be sillier!
No, the Carnot cycle has nothing to do with this particular steam engine, my dear fellow --
Oh, for goodness's sake!
-- nor is he any sillier.
Look here, dear chap. All I want to know is Watt is the name of this illustrious man who invented this engine!
And I would say yes it is.
Watt is?
Without a doubt.