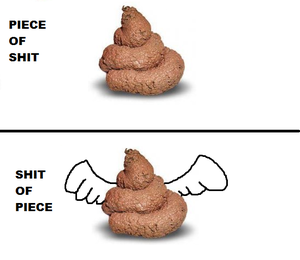 A piece of shit above. A shit of peace below. Such is illogical logic, but it also brings to you how can a supreme clash of two perspectives formatting the inadequate line of presumably what has trefiled the breaklish grotesque difference.

But if you ARE not convinced, an equation is ingeniously laid before you. Illogical + Logic = a + b.

Move the bitch over through a negative and positive side

Cancel away the logic and illogical, because they are equalised due to a supreme clash of two perspectives formatting the inadequate line of a presumably what has trefiled the breaklish grotesque difference.

Thus, it equates to:

A shit of peace

The earliest use of an illogical logical perspective ever used was probably around 1480, created by the humorist Vasco da Gama. Based on texts passed down for ages, it recorded his earliest discoveries of illogical logic. He was just walking around looking for victims when a divine thought struck him. Could something be so illogical that it can actually be logical? Pondering over the thought for the rest of the day, he questioned his advisors and friends over the thought which lead to none of them coming up with a single conclusion. Eventually, Vasco got so pissed he ordered them to be impaled on stakes for being Idiots and decided to take matters into his own hands. 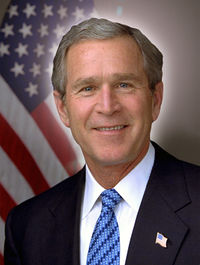 A simple yet observant friend of Vasco juggled the consequences of his situation on illogical logic, but nonetheless got mindfucked and decided he would rather be impaled then spend the rest of his life on thinking about something, he thought, might never have an answer. He was impaled on an extra-large stake as a result of his ignorance.

He held various talks around his Country, even going as far as taking boats. It was only then that the illogical logic parodax came to life through dozens of philosophers enabling the subject to be traversed in different ways. Yet, by 1494, more than twenty cases of deaths were reported in each town. The term was so mind fuckingly difficult to even comprehend, 58 out of 79 philosophers jumped off buildings. Yet, the great Vasco da Gama remained unfazed and struggled to keep the talk going. Eventually, one Priest finally had the guts to actually talk some sense into Vasco, pointing out that there may be more deaths occurring due to the significance of the situation. Vasco got so pissed he ordered the priest to be cut into tiny pieces and be fed to dogs. Then he started wondering if the priest was actually right. After a few more years of tolerance, he passed away, but the illogical logic theory has yet to be solved into perspectives. During the time of The Great Alcoholic Pigeon, a new philosopher came to life – John Calvin. He was simply a child when given the paradox. It was laid out simply to him too.

John Calvin, a famous philosopher. Just a lad when given the paradox, he displayed signs of prodigal uses when stating sides of illogical logic some people never managed to even think of. He is depicted here by Bill Watterson as a small dwarf, but behind that image lies an Albert Einstein.

So he thought about it.

Then it struck him. Maybe it's true answer can be developed into an equation. But at that time, algebra was yet to be brought up to fame. Realising he may need help for this, he also similarly held talks in desperation that a true mathematician might come into the spotlight. After twenty years of toiling, his frustration was evident. Still a dwarf because Bill Watterson never bothers to change his character in his stupid comic. But his frustration immediately flopped over, when a new person was ready to take the wheel. His name was Albert Einstein. 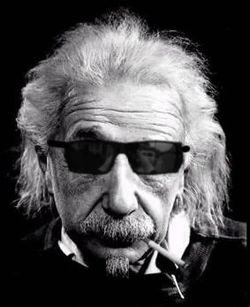 Albert Einsteins, before the Illogical Logic paradox came to life, was a simple hobo working to meet ends meet. His supreme sheer genius was discovered, thanks to John Calvin's talk on its parodax. His sheer hard work towards the paradox is dedicated to John Calvin, the very man who helped him discover it.

Much of the paradox is contributed by Albert Einstein. Even though a gangsta at an early age, he was responsible for the equation which summed Illogical Logic up really well. After the talk, he felt a call of duty to take up chance, and eventually stuck to his blackboard writing for days to come. He received notable critical reception as one of the earliest and only Scientist to actually not get mind fucked by the paradox and not be driven to suicide. In fact, his notable equation eventually lead to an algebra equational theory. This very equation he created is one of the most recognised and notable created – the piece of shit becoming a shit of piece. Exactly, the one I mentioned earlier, the equation I wrote out to you, 85 % of it was created by Albert Einstein. Eventually, other asshole mathematicians changed some of the corners of the equation, so the one I laid out may not be that original. 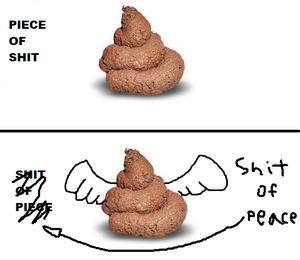 Now back to my article. After the edit, the formal equation was stuck as an explanation for Illogical Logic. The famous instance was then remained as it is, and Illogical Logic was forgotten. That is, until, 2002, which will be explained in the next category.

In 2002, a famous man brought the paradox to life again. Steve Jobs was responsible for that, with his Iphone shit or whatever. Apparently, an app was created on Illogical Logic was available. Such was a simple game on trying to figure out what the fuck can be so illogical that it's logical. Eventually, the app drove people to believe that the equation created was Bullshit, and people, like George Carlin started holding talks – for example: The Equation For Illogical Logic Is BullShit! Who's with me? It was followed by standing ovation and George Carlin continued his comedic talks. Though some people disagreed with him, he didn't impale them on stakes like Vasco da Gama. Oh no. He'd love to but Genius George realised that modern society was way more civilised and decided that a suit of five million dollars for slander will do. The talk and thought were then forwarded by Barack Obama, who, had then became President Of The United States Of America, had more of the population's trust in him.

Many thought Barack's idea made sense (They gave credit to George too, but being assholes, they gave more credit to the President than the man who actually created the idea.), but by then Illogical Logic had been brought back to life again. 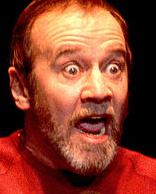 George Carlin, one of the many modern talkers responsible for bringing Illogical Logic back to life. His disapproval and shock on Albert's equation can be seen evidently on his facial expressions. A man who managed to bring Illogical Logic back in the spotlight, but never received much credit for, he remains a man much adored by the society, but never a philosopher. Poor George.

By 2007, a furious debate over the Internet over the equation continuously ran, but the current and final contributor was Captain Obvious. Indeed, he stated the obvious, but something so obvious and essential that over hundreds of people never realised it.

“Illogical Logic is about illogical logic”

Then everyone slammed their hand into their other palm. 'That's it!' They all cry together. 'Illogical Logic is about illogical logic! Which is why something so illogical can be logical. Because it IS about illogical logic!' Immediately, overnight, Captain Obvious' statement was published internationally worldwide. And finally, a conclusion was made.

And thus the conclusion was broadcasted internationally.

Illogical Logic was used in various magazines, quotes, movies and books. The paradox being one of the leading icons of America's culture, it has been used, parodied and repeatedly showcased as a metaphor. An example may state:

Such is an example of illogical logic. Another has been mentioned repeatedly.

'A piece of shit can become a shit of peace'

Thus, these meanings can traverse in many ways, based on your own perspective, and thoughts. Media has also made full use of its meaning, and so has comics when advertising in order to make their projects a critical and commercial success. 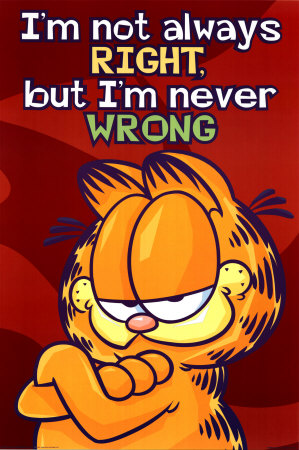 Political involvement with Illogical Logic has been brought to an expense due to its diverse meaning. However, its politics use abruptly ended after its conclusion in 2000s. However, its critical meanings and talks are still held as a cult following due to some fans who still have the energy to actually continue this tedious bullshit. How long can it last? We may never know.

After all these humbugging, I will finally showcase to you the timeline of this famous paradox!

'1480 (around there) Vasco da Gama creates the paradox when it strikes him.'

'1480–1500 Over hundreds of philosophers are mindfucked and over three-quarters of them engage in suicide.'

'1701–1800 His talks are showcased, but no one stands out. This time pisses off some mathematicians, but they can do nothing because they themselves are too mindfucked over the paradox to speak.'

'1800–1900 Albert Einstein astounds the World with his equation on the paradox. His famous equation brings him fame.'

'1901–2000 His equation is edited, Illogical logic is forgotten, until an Iphone app brings it to life again!'

2000–2010 George Carlin and Barack Obama brings light to the paradox and gives it a new meaning. Captain Obvious, as usual, states the obvious, and it leads to an epic conclusion of the paradox.