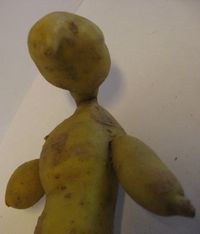 A humanato. Notice the intelligence.

The humanato is a mammal of the order pritatomates, like humans. Around 95% of humanato and human DNA sequences are the same, with only the humanato's superior intellect producing a difference.

This process takes place inside the humanato mother's womb

Humanatoes are like humans in several areas, the most prominent being the way embryos develop into respectively full-fledged humanatoes and full-fledged humans during pregnancy. The humanato embryo follows the same cycle as that of a human embryo. See picture to the right.

As you can see, the humanato possesses qualities far above the average human being.

As human science has evolved, sophisticated examination methods have appeared. One of those methods have been used to determine what humanatoes consist of. A recent attempt by Ph.D.pota Shou Tucker to discover the truth using state-of-the-art machinery resulted in a surprisingly simple body composition, as seen on the picture to the left.

"In the beginning we didn't really believe what we saw. It was a scientific breakthrough that surprised us a lot. While the general conception of humanatoes has always been that they consist only of potato substance, we actually proved that most of their brains -- if not all of it, we're not completely sure yet -- consist of tomato substance. We are aware that this information is still very fresh, and as a result we're not ready to draw any conclusions yet as to why humanatoes, who have that potato-like look we all love, include tomato substance. All we can do is guess."

As a response to Shou Tucker's comment, world-renowned artist Mike Tyson has expressed the following regarding one of the humanatoes taking place in the experiment: 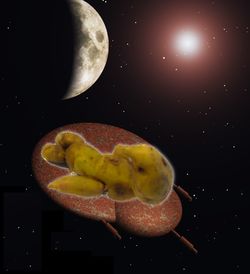 Though heading to the moon was the humanatoes first and most logical choice, they ended up going to the Earth.

Humanatoes only recently appeared on Earth. Originally living in another galaxy a long time ago, humanatoes have always been smart. As a matter of fact, what most people (aka the ignorant masses) believe are invented by humans, are in fact invented by humanatoes. Such inventions include, but are not limited to:

Always hiding in the dark, humanatoes were not discovered until 23 January 2009, where they went to a DVD-rental to see if it was possible to rent the second season of Blackadder, as they had heard that the name of the third episode in that specific season was "Potato". The DVD-rental owner fainted from seeing the potato-like creature. The humanato in question was caught on CCTV, producing a ruckus the next day on the local police station. Various news stations soon found out about the breaking news, and within a short amount of time most of the world were aware of the at that time very mysterious "humanoid potatoes", as the police had named them at that point.

It was then that the humanato clan decided to come out of hiding. They planned a world meeting with the world. It was to be held on 1 February. 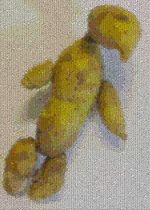 The humanatoes quickly rose in popularity. This mosaic appears near the White House.
Picture taken with a CNN news helicopter.

At the meeting quite a few powerful people appeared. Barack Obama, having just been inaugurated, felt that he needed to show up on this day of destiny. Bill Gates also appeared, hoping to patent the humanatoes and use them in an anti-piracy ad. Hasbro's chief-boss executive-and-all-powerful officer-general Brian Goldner made an appearance too, probably hoping to buy the rights to make the humanatoes into toys that could be sold as an update of Mr. Potato Head.

As humanatoes are unable to speak nor do a very good impression, nothing big happened at the meeting.

“Nothing big happened at the meeting”

“Yes, we can not understand why nothing happened. It did not bring change to the world. Let's hope something changes!”

~ Barack Obama on the situation in general

Greengrocers did not like the general situation, as several people stopped eating potatoes.

A white humanato beating up a coloured humanato. Serious stuff. 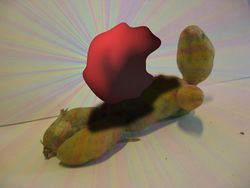 Humanatoes believe in what they see. And they see a red deity.

Most people think that humanatoes are believers of the potism religion. That is, however, false. Humanatoes are agnostics who believe that a red deity floating above them exists on a daily basis. This is contrary to the belief that most human agnostics share. As a result, protests against what is generally called a "misuse of word" has arisen all over the world. Famous human agnostic Gordon Brown lead a march in March 2009 for the regaining of the original meaning of the word "agnostic". Marching all the way from Glasgow to London, Brown hoped to achieve a world in which words regarding religion were correctly used.

Arriving at the Speaker's Corner in London after a week-long march, Brown held a speech:

"So I say to you that even though we must face the difficulties of today and tomorow, I still have a dream. It is a dream deeply rooted in the British dream, that one day this nation will rise up and find out the true meaning of its creed -- "We hold these truths to be self-evident, that all men are created equal."
This is our hope. This is the faith that I go back to the North with. With this faith we will be able to hew out of the mountain of despair a stone of hope. With this fate we will be able to transfrom the jangling discords of our nation into a beautitul symphony of brotherhood. Whit this faith we wil be able to work together, to pray together, to struggle togetber... knowing that we will be free one day.
And if the United Kingdom is to be a great nation, this must become true."

Nevertheless, humanatoes still call themselves agnostics. Though they are unable to talk.