HowTo:Be at one with the universe

Are you tired of being a small cog in the giant machine of what is, for all intents and purposes, an infinite and uncaring universe? Of course, we all are!

In fact, people have attempted to expand their minds and become a part of the bigger picture ever since the monkey lost its tail and grunted to itself, "Damn, now I'm all self aware and shit."

"But how do I, a mere newborn babe/small child/university student/accountant/elderly person just steps away from death's door, whose gaping maw is opened wide in anticipation of my ethereal etherealness, the insignificant mote of dust that is me, passing through its opening en route to what will surely be a depressing and disappointing eternity, attain oneness with the universe today?" you ask. 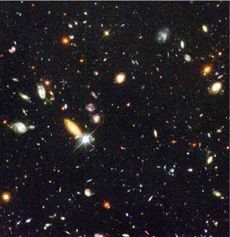 This is the universe. You are beside the bright dot on the right, near the bottom. No, your other right. Your other bottom, too.

How, indeed. I honestly haven't a clue. Luckily for you, people far smarter than me have spent their entire lives trying to force their grasp to equal, if not exceed, their reach. Some have even succeeded, or at least that's what they tell me. But how do I know, really? They could just be messing with my head as part of their greedy plan to sucker me into shelling out $14.95 for a copy of their self-help book; one of many coincidentally and conveniently located in the Self-Help section of the bookstore.

They don't much like me there. People are always leery of a guy in a trench coat and black socks. Don’t know why. You'd think the sombrero would help...

Relax, you're in good hands. Through years of intensive research and whatnot, I have become an expert of sorts in this whole being one with the universe thing.

I'm boiling over with knowledge, you see. Chock-full of liquid knowledge heated to the point where it gets all bubbly and steamy. Like the shower, but with smarts. And soap too. Soapy bubbles of knowledge. Did you shower this morning? You smell like dandruff shampoo.

It's kind of hot, actually. You single?

Sorry. Got a little hot under the collar there. That'll happen to you too, once you're filled up with the universe. It's kind of like puberty, but without the weird hair sprouting down there. Okay, maybe a little.

Again, relax. The first step to becoming one with the universe is to be patient. Yes, that's it; patience.

Take a deep breath. Take another. No, wait. Let the first breath out before you take the second. Now you're all stretched out. 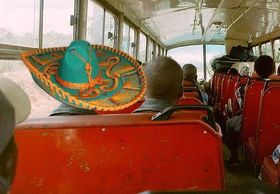 "It's a good thing that you sat down beside me"

Okay. Relaxed? Check. Now what...hmmm. Hold on, it'll come to me. Oh, yes! There's a bunch of different techniques for becoming one with the universe. After we've gone over the basics I'll cover some of them. Only the best for you; you're paying with cash, right? Good. That's the first step to achieving oneness with the universe; paying with cash.

Move "relax" to step two. I get so confused sometimes, what with my being at one with the universe and all. It's tough staying in my own head when me is so small and universe is so large. Plus I ate a not-inconsiderable quantity of paint chips as a child.

Just to be clear, the chips weren't in the form of a child. Semantics and all...

They say it all started with a big bang, don't ya know. The universe, I mean. All of this...this stuff came from an infinitesimal point of tinyness surrounded by space that didn't exist, until the stuff expanded from the tinyness, bringing time with it, spreading out through the nothing...as something. Kind of freaky, if you think about it. I try not to; thinking about the universe gets in the way of being one with it.

Being one with the universe is knowing that everything can change, like getting on the bus in Manhattan and waking up in Texas, but always knowing what to do in any given situation at any given moment, like finding a place to hang your sombrero after somebody moved your furniture while you took the bus from Dallas, to St. Louis, to Nashville, back to Manhattan, all the while wishing that you hadn't left your One with the Universe Club membership card on the folding table at the laundry mat, because it gets you in free to every roadside safari attraction in Montana...which would have been a much better place to visit than the bus depot in Dallas, only because Montana is the land of the Big Sky, and being one with the universe means that you look at the sky a lot, thinking to yourself, "Wow! The sky is really big."

Tip:
Eat more bran. Regular BMs are step four on the road to being one with the universe. Take the newspaper with you. That's step five.

What? Focus? Of course! That's step three. Clear your head of the clutter of the modern world and the detritus of a horrible childhood. What? The rapid shaking of your head leads me to conclude that your childhood was virtually a Rockwell painting of Technicolor suburban bliss. Well, you're obviously just suppressing the bad bits, which puts you halfway there. Most people are distracted by the memories of a terrible upbringing, yours are buried away in a black ball of pain deep in your subconscious.

Which is kind of like they aren't there at all, right?

To help you focus, remember that time your television died. Think back...the sound went all murky, then the picture became a horizontal line, then it was just a dot. Then nothing; and you thought to yourself, "Dang, now I'll never know who shot JR!" The next morning you moved the TV to a shallow grave in your neighbor's backyard, because the voices in your head wouldn't stop shouting...

Maybe that was just me. 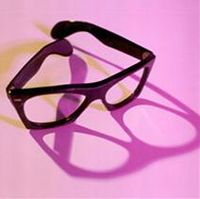 "It may help if you take off your glasses."

"What? I'm moving to a different seat."

But we're almost there! You're so close to being one with the universe; it's too late to turn back now. There are only a few more steps to go.

No, don't get up! That last part wasn't supposed to be out loud.

It may help if you take off your glasses...nibble on one of the earpieces. Now tell me what you had for breakfast...no! Use a husky voice.

There, now you're clear. Your mind is empty and ready for the next step. I skipped some steps? No matter. I'm sure that they weren't all that important.

Tip:
Statistically, if you're riding the bus and notice that there is no "crazy person" on board, it's probably you. This explains your tinfoil hat, probably.

Next comes the tough part. You've got to find a technique to help you become one with the universe.

There are many, many methods for this, including drugs, meditation, religion, and drugs; I'll only present the cream of the crop to you as you're my best customer. Also my only customer, which helps. I'm kind of regretting starting this business in the first place. Imagine; I've been sitting here at the back of the bus all night, with a sign that reads "I'm one with the universe. Ask me how." tucked into the brim of my jaunty sombrero and everything, but you're the first to stop and ask me how.

It's a kick in the groin, that's for sure. The only other guy who sat beside me hit me in the groin, and he didn't even bother to ask me how. Maybe I should set up shop on a different bus.

Do you know if the number 105 is nice? This bus smells like pee. You smell nice though. What is that scent, dandruff shampoo? You must have to fight off suitors with a pointy stick. If I wasn't so full of the universe I'd try to woo you.

Man, you'll need to find a better place to live before you can be one with the univ...