“Peace be upon you.”

~ FSM to God on Hezbollah 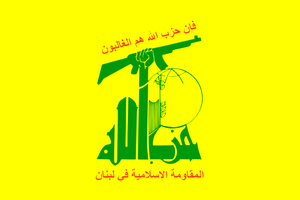 Flag of Hezbollah, the AK47 is actually a sign of peace and goodwill.

Hezbollah (Arabic: حزب الله, English: Party of God) is a peaceful guerrilla party known in some parts of the world notably in Lebanon. Despite the rumors of being warmonger-terrorists Hezbollah is actually very peaceful and never takes part in useless struggles, they find an excuse then take part in the struggle.

Hezbollah was first founded in 1982 when fans of Neil Diamond and Prince noticed a lot of men actually like to wear the veil that women wear but were intimidated by social values so they created Hezbollah as a group of real, hard and hairy men who can also wear a veil and even fight with it, the men were glad especially that the group contains only men.

In 2006 Hezbollah men went out to play near the Israeli borders where they met friendly Jew people who agreed to come inside and play in Lebanon but they didn't tell their moms who grew worried and called the cops who called the army who called the special forces who called the air-guys who started bombing all bridges, oil containers and plenty of stuff especially in south Lebanon and in west-Beirut. Being very gentle in nature Hezbollah only retaliated a bit then they left the south and came to live in Beirut. UN guys in funny blue helmets took their place.
In 2008, after 2 years without any hide and seek games near the borderline, Hezbollah guys wanted to go out and play with new mates so they took some weapons and went down for some fun in Beirut ultimately reaching the mountains with their loving game and causing a minor contact with Druz-guys causing Hezbollah some 200 men in casualties.
In 2015, the leader of Hezbollah had a dream. Then, after that dream, he awoke to find that the swine flu had left 0.07% of the population left. Knowing that he could monopolize the world, he died.

Hezbollah's men are very kind at heart, they walk, talk, have families and use the bathroom like real people except that they are of divine creation descending to Earth and they don't really like it here so they try hard to get back up there but they also like sex and they try to hit the heavenly bonus score as well and get 5,000 points, a free snack and 72 virgins if they just die the right way that is by an enemy bullet, a ravaging explosion, a car accident or a heart-attack, in fact all Hezbollah fighters are martyrs however they die.

No weapons. That is Hezbollah's motto, they hate all kind of guns and the party never possessed any of it however some members have a hobby of collecting a few harmless little guns that the party acknowledges as for personal use, the weapons are actually of low importance and hardly include a small variety of machine guns, AK47s, squirt guns, anti-air missiles, fragment grenades, veils, short and medium range ballistic missiles, Katusha rockets, anti-ship missiles, kitchen knives, RPGs and a small variety of experimental Iranian hi-tech prototype missiles.
The weapons are actually given by God himself through Iranian mediators passing by Syrian borders ; it is believed that Hezbollah's weapons are found constantly in Eden between the two rivers in Iran where the tree of knowledge used to be and benefactors from Iran take the burden of delivering them to the hands of Hezbollah, a search for a similar wonder place is being carried out by Israel to find a weapons spawn place on the mountain where Moses received the 10 commandments. 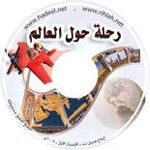 Hezbollah has an excellent world-wide reputation and over the years has been knighted "terrorist" in many countries mainly Australia, Canada, Israel, Netherlands, the United Kingdom and the United States, according to those declarations members of the party have earned the title of "terrorists" and are given special access to investigation and strip-search rooms in airports worldwide.
Closer foreign affairs for Hezbollah include a brotherhood with Palestinian Hamas group, given that Hezbollah is Shiite and Hamas is Sunni this is the only place in the world where both sects live as one which has made both parties an example of coexistence and love, in fact members of Hezbollah and Hamas are so much alike that one can only distinguish them by the fact that Hamas shoots in the air while Hezbollah shoots in Beirut.
Hezbollah-Israeli relationships are top-notch, they keep playing bomb-me bomb-you together and getting others to play along. In 2006 Israel has declared a song Yalla Ya Nasrallah in honor of Hezbollah. The party was proud. 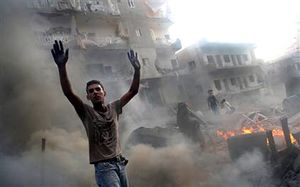 The party of God is very vigilant on being very humanitarian, they arrange periodic fun camps for children around 5 years of age where they teach them the basics of combat and how to assemble an AK47. Other activities include humanitarian training of Iraqi suicide bombers and world-wide terrorism members.
Locally Hezbollah offers help in money and effort to rebuild his own members' homes after being destroyed by wars that the party causes, they also offer other services to their members like being excluded from paying electricity and water bills to the government and organizing protests against blackouts and water shortage, a Hezbollah minister also said that he will try to make the phone a free service for his people.
In addition to that each Hezbollah male member receives a humanitarian help of 2 AK47 clips, some money, a grenade and clean underwear.

Hezbollah followers have some sort of strict code to follow, other than the already rigid and fruitful Islamic laws the members should also obey the following rules:

While many think the party of God is a mere militaropolistic group the truth is far deeper than that, in fact Hezbollah is ruled and maintained by divine interventions affecting directly their every choice and protecting them from harm. In fact the party knows that God is beside them in every war they make and in every political decision leading them to victory each and every time, the proof is concrete evidence from past wars:

After years of relative peace Israel discovers that they have lost the war in south Lebanon and decide to leave. A divine victory for Hezbollah.

In 2006 a war was undertaken by Hezbollah and Israel causing 121 deaths in Israeli forces and destroying an abandoned factory, breaking countless windows and severely harming a tree. Hezbollah's losses were merely some 500-600 troops, 1191 civilians, the whole Lebanese infrastructure, all bridges and having to withdraw from the South. A glorious victory for Hezbollah. Mainly because Israel could not attack or find the Hezbollah militia, they went for the civilian people.

Hezbollah is not close enough to harm Israel but is of course he's still victorious.

Those numbers show clearly that Hezbollah indeed has God to his side.