“Ah, Great Yarmouth. One of the only towns you can smell before you can see it. Usually because the smell turns you blind.”

For those without comedic tastes, the so-called experts at Wikipedia have an article very remotely related to Great Yarmouth. 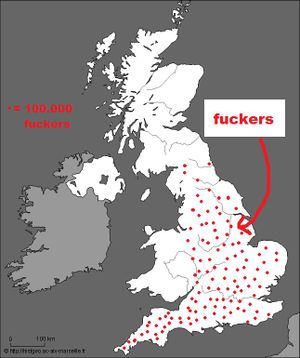 Great Yarmouth is the number one holiday destination for the chavs, elderly and deceased of the Great Britain. It proudly boasts the greatest number of people with the lowest collective IQ in the whole of the northern hemisphere, and is only beaten for number of Portuguese residents by, well, Portugal.

Yarmouth was first discovered by Sir Walter Raleigh in the middle ages, who promptly created the River Yare in order to keep any residents from escaping. He added the 'Great' to the beginning of the name in the world's most ironic use of the English language to date.

The large majority of the population are Chavs. Many of the residents of Yarmouth pride themselves on the ownership of an ASBO. The council are considering giving the whole town an ASBO to save the trouble of having to send them to the right address. The local Mothercare recently started stocking Cider in order to appeal to the next generation, but has now been shut down after multiple ram raids, burglaries and thefts of the cider. Many of the chavs that have attempted crimes on this mothercare have worn ridiculous outfits to try to persuade the staff that they are babies. Mothercare staff have been warned that a 'baby' with a moustache is not necessarily an older chav mimicking babies, but the result of multiple generations of inbreeding that Yarmouth is renowned for.

Inbred families save money at Christmas as their Uncle and Dad (or Auntie and Mum) could be the same person - hence halving expenditure on presents and cards. 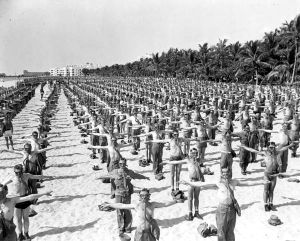 The average age for reproduction is twelve, and double-buggies are seen from the age of 14. Grandmothers at the age of 27 are often seen . . . and heard. The average mass of a single mother (not including Argos ankle chains) is 22 stones. Prospective visitors to Yarmouth who have children (of any age) should be aware that contact with the atmosphere alone can induce pregnancy and consequent welfare dependency. Tattooing and piercing of babies and children is widespread. Inhabitants have a congenital phobia of natural fabrics and wear their traditional costume of shell-suits and track suits from an early age. For the more intellectual of the population coach trips are arranged to view avocados and such exotica in other areas. There is no Asian population - they have more sense. Average size of television screen (despite Yarmouth having a per capita income comparable to Chad) is eight feet.

Imaginative language skills are limited to naming their children "Summer-Jade," "BSkyB", and "Diamond-White."

Christmas dinner for the, for want of a better term, classier residents consists generally of Happy-Shopper Potato wedges, cider with a dessert of Haribo sweets topped with Angel Delight. Otherwise, it's chips with special 'Christmas Sauce' (glitter and glue).

Source: "The Life of the Yarmouth Primitives-a study" Dr.James Dweeble, University of Tulsa (2006)

After a recent flock of pork and cheese that have entered this town, the 1st language is now Portuguese. People of have responded to this by learning pork and cheese to be able to fit in. Common phrases used by yarmouth people while speaking to portuguese is Grass-your-arse, and ... well thats about it really. 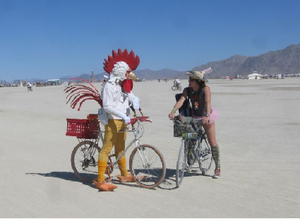 Central Beach close to the Jetty

Great Yarmouth claims to be Britain's number one seaside resort, but on closer inspection it seems that upwards of 80% of visitors are confused lobotomy patients who had escaped from asylum hospitals in the surrounding area . The remaining 20% are "holiday-makers" from the North who are drawn to Great Yarmouth due to it's relaxed rules of child abuse and domestic violence.

There are a number of ways to access the town. A popular way is to stand on the beach in Essex and wait for the long shore drift to move the sand northwards towards the town, this process can take between 16 and 20 weeks, but still vastly outstrips the train service to the town. The timetable for this service can be found posted on a large wall at Norwich railway station, it is based on tides, moon phases and the outrage of Richard Littlejohn, and can result in gaps of several decades between train services as happened between 1996 and 2004 when there was only one service to Great Yarmouth which was hijacked by an angry horse at Lingwood and forced to retreat to Norwich.

Arrival in Great Yarmouth can be an un-nerving experience for even the most seasoned traveller. Strict immigration laws mean that you must take an IQ test at the railway station, if you pass this test you are returned to Norwich as the keepers of the town's population are concerned about over-stimulating the inhabitants. If you fail you are then led to a holiday camp where holiday-makers are interred accommodated in 1960s caravans. Once visiting the town for the first time, even Northerners can muster the intelligence required to realise what a stinking heap of shit they have found themselves in, and as such many refuse to leave the camp. Instead they put themselves at the mercy of the camp's entertainment officers who put on stimulating activities such as "Knob the Paki" and "ASBO races". As well as staving off boredom, these kind of communal rituals help keep away home-sickness too.

Yarmouth boasts many wonderful attractions including:

The Local Council recently wasted eight million pounds (40 million cigarettes in local currency) renovating the seafront. Whilst the IKEA fairy lights and extra-wide pavements for even-wider residents have been applauded, local Chavs have complained about the lack of all-night off licenses. On the plus side, it has given them something to drive their Corsa's around on.

Recent work on the market place has included the installation of all-round Christmas lights and a large wide screen television that broadcasts 'GYTV' but now, thankfully, has been torn down. The increase of chip stalls in the market place has led to a recent boom in the pigeon population. Local residents are said to be pleased at some intelligent company at last.

Probably the epitome of crass, the pedestrianised Regent Road is located between the town centre and the seafront, and links the two. Some of the more memorable shops and attractions on Regent Road include:

And before you buy the famous 'yarmouth rock' think, what have they actually put in it? ;)

You may wish (after inoculation) to visit one of a number of Discotheques. Age limit for females is a maximum of 16, although on some nights an age limit at the opposite end of the scale is enforced: you have to be over 50 and called Pat,... and be "gagging for it..." Remember however not to get involved in one of the long-running family/friend feuds which can last for twenty years ("You called me a slag in 1997..."). The more libertine visitor is warned against using the services of "high-class" 'ladies of the night' who will "toss you off" for £4 (£3 in School Holidays, plus an extra £2 to her friend to mind the double-buggy). Table-dancing is sometimes seen: "so close you could relive the fishing fleets of old" (TimeOut 2006) and there is a swingers' club called "Club Fantastica" (NB this is actually true) where you can meet overweight couples in their fifties - all of them called Pat and Geoff...and have them fiddle with you... but "no watersports" (as a printed - and laminated - sign states)... the place smells of Dettol which worried me when I made an investigative foray to the establishment... no, honestly. I made my excuses and left... all in the name of journalistic truth... really. In keeping with the policy of this site - Fantastica became Phantasia then shut its doors forever, depriving the local avant-garde populace of a meeting place to flog themselves silly - thereby alleviating the utter boredom of residence in this Eastern Utopia.

Construction of the outer harbour began in 2007 using £18,000,000 of public money and a bucket of shiny pebbles from Winterton. Since it's completion in Feb 2010, no ships whatsoever have used the state of the art facility. It has been suggested that the world pedalo racing championships maybe held there in 2011, but CEO Eddie Freeman denied this rumour and has stated that the harbour will eventually be the UK's main man made material importer.

"it's smashing" he said, 78% of the worlds nylon and polyester are currently imported to Great Yarmouth. Local shellsuit retailers are said to be overjoyed as are local residents. Rumours currently circulating the Barrack estate suggest that shellsuit prices may drop by as much as 3% leaving local people more cash for haribo sweets, massive car exhausts and giant gold plated ear rings.