From Uncyclopedia, the content-free encyclopedia
(Redirected from Fred The Monkey)
Jump to navigation Jump to search

“And I stood upon the sand of the sea, and saw a beast rise up out of the sea.”

Proving that the rotten apple doesn't fall far from the decaying log, Fred Phelps' lovely daughter, Shirley Phelps-Roper, is best known as the supermodel spokesperson for her father's Westboro Baptist Church. Westboro is that Kansas church that imagines that God hates fags, jews, and related phenomena. For Shirley to be its spokesperson, when in her heart she despises everything the church stands for, takes the courage of a lioness. Shirley Phelps-Roper smiles like she means it and privately curses her luck every day of her godforsaken life.

Shirley once yearned to be known as one of the major ambassadors of love and universal acceptance of her generation. She planned to become a hippie, high on life and weed and psychedelic music and take the message of "Make Love Not War" to the liberated masses. Unfortunately, due to a case of mirrored neurons - resulting from extreme inbreeding combined with the Phelps' tradition of dropping their babies on their own heads - by the time Shirley's message of peace, liberation, and cooperation travels from her frontal lobes and reaches her voice box and tongue, it gets garbled. When she intends to preach about loving your neighbor as thyself, or turning the other cheek, or she gets deep-down into the scary bible stuff like "Judge Not and Ye Shall Not Be Judged", her brain's electrical wiring gets all jiggy and entangled in the neuron pathways - receptors firing willy nilly and brain-darts going every which way, everything moving quickly but without knowing the correct destination - and instead of proclaiming "Love Thy Neighbor as Thyself" it comes out GOD HATES FAGS.

Yes, prim and proper Ms. Shirly wants to yell from the rooftops and tell the world to feed the hungry, clothe the poor, and house the homeless. But because of her case of synopses-hokey-pokey-switchback she actually sounds like a newly rabid monkey turning on its mate. And, Bless her heart, when she wants to wrap her shapely arms around everyone and give them that patented Shirley hug and kiss on the turned-cheek, she starts twitching and hitting the air and then the foaming starts.

Poor misunderstood Shirley. An intelligent caring advocate for world peace, bestiality, gay polygamy, and marijuana legalization in her heart and a loony tunes activist in reality. She tries to do the right thing, but because of her brain damage and the enormous amount of time she's spent portraying the character she had to play to keep her late father happy, she ends up falling on her face in a puddle of shit which she'd swear with her last breath is the finest swiss chocolate she's ever eaten.

Don't be fooled by what you remember of Fred Phelps' smoothness and people skills. When he went on a wacky that wacky was really Three-Stooges wacky. So in a frenzy of religious ecstasy or peyote overdose - Phelps tried to describe it once but it came out sounding like a bear bent over - he decided to take his very pregnant wife, travel to Europe, camp out in a stolen Volkswagon in Wittenberg, Germany, and make sure that when his daughter entered this life she'd enter it while being nailed to the door of the Castle Church. He proficiently assisted his confused wife in the birthing process as she lay on a cot at the church's entrance ("breath and push, darling, breath and push"), grabbed and eased Shirley part way out of the womb, hoisted her tiny arms in the air, nailed her to the door, listened to the mingled cries and screams of the mother and daughter which sounded to Fred exactly like a heavenly chorus, and his brain cracked apart as right then and there he first started preaching about fags.

Ever since her second birthday Shirley had to endure these regular faggings from dad. She always had a strong masochistic compulsion, an unfortunate side-symptom of her form of "the damage", and she had to listen to papa rave about GOD HATES FAGS every day of her life. Shirley humored the old man. She knew that he'd planned her destiny years before her birth, and that in his non-medicated mind she was supposed to be his vessel to spawn the neo-Aryan race of Phelpites. Even now that Dad is gone (he picketed his own funeral - it was in the will) Shirley still plays along. But even as she exhibits the key qualities of Phelpite leadership - ginger hair and a preference for bold fonts - she lives a secret inner-life where peaches are rainbows and breasts are as soft as free-floating seaweed. 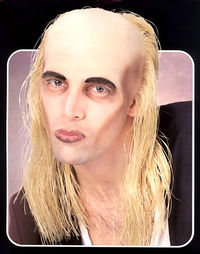 Even with her handicap, Shirley has carved out a faked but successful career as a devout member and spokesperson for the Westboro Baptist Chuch. Consisting almost entirely of white people, grammar school dropouts, and homeschooled kids, the church's usual form of service is to warn people about a terrible entity called GOD. They do this by displaying colorful signs with poetic verses. Some of Shirley's favorites are:

She wrote a couple of those herself.

Shirley's resume also contains work as a summer intern at a body sushi platter place, where she was known as "the crazy girl" that everyone knew was not only gay, but lots gay.