A typical supermodel. Note the uplifted nose, a common trait found in this species.

Supermodels are a type of unidentified lifeform, appearing slightly humanoid while also exhibiting the traits of several other organisms.

Supermodels should not be confused with normal models that are just human females trying to ruin the fragile self-esteem of young girls that can never hope to reach their status and making human males expect too much out of their prospective mates (leading them to a long life of forced celibacy until their standards are lowered to the near-ape level).

All supermodels are female. They say male versions exist, but they lie.

Supermodels have not been placed into any kingdoms as they defy nature as we know it.

They are not an animal because they do not eat... anything... at all. All vital nutrients appear to be absorbed from money through osmosis.

They do not display any forms of cognitive thought. The only sign of intelligence is their observable self-awareness, however they seem to still follow the same behavior when not in front of their own reflection as they would with a mirror before them.

They also are not plants or fungus as they are mobile. They do not need sunlight to grow, in fact, they prefer artificial light such as spotlights and tanning beds under which they bake themselves into a nice shade of melanoma brown.

Supermodels can be found only in large, wealthy cities. They reside in areas that are dark everywhere, except right where they are currently standing.

Flashing lights will attract them, causing them to twitch and twist into awkward positions.

They are very territorial with each other and will gladly rip each other's faces off with their plastic nails if provoked. Gay men are almost entirely immune to their wrath and can control them, for this reason, flocks of supermodels will follow the gay men and their orders.

Unattractive female humans are dominated by them and turned into their slaves, forced to serve the supermodels' every whim lest they be verbally abused.

Although not related to the cat family, supermodels will often prowl catwalks. 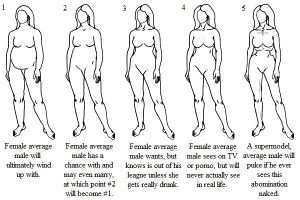 The difference between supermodels (right), and the human females they resemble.

Luckily, supermodels generally keep their clothes on, as to see them naked can cause permanent blindness, insanity, or at least outright revulsion.

Because they tend to remain clothed, however, male humans often do not realize just how disgusting these things are and may actually perceive them to be beautiful. Female humans also fall for this fallacy and wish they could look like one without realizing that if they ever did, not a man nor even lesbian would ever touch them again.

Supermodels are always coated with paint and makeup to disguise their true features, they may be green underneath for all we know.

Supermodels are always taller than the human females they mimic, they also tend to wear heeled shoes so oversized that they walk funny and can be taller than men as well.

They weigh almost nothing, a sudden wind or good sneeze can easily knock them down. Sometimes they fall down without help, which is not only so entertaining that news stations will air it multiple times and YouTube will enjoy another viral video, but it also releases a massive burst of pheromones, causing all men within twenty feet to pile over one another in a vain attempt to court her.

Supermodels are perhaps the strongest evidence against a divine creation as no god would ever make such an abomination against nature.

Nevertheless, one would think even random mutations would be more intelligent than this.

It is probable that supermodels were seeded on Earth by evil aliens after their genetic experiments went wrong.

Ironically, they only spawn near a homosexual man in expensive silk clothes.

Supermodel spores fly to Africa where they grow into little black kids that are mistakenly believed to be malnourished. After they suck in enough pity money, they build a cocoon and emerge tall, white (usually), and extremely arrogant, at which time they will migrate into an urbanized area to find their gay master.

Supermodels only live to be about 40, although during the last 5-10 years of their life, they will undergo a horrendous degradation that only they will not recognize.

At the end of their tragic life, a supermodel will undoubtedly look exactly like a meth addict.