From Uncyclopedia, the content-free encyclopedia
(Redirected from Frank Black)
Jump to navigation Jump to search

“It is I who is truly un chien andalusia, not this phony!”

For those without comedic tastes, the self-proclaimed experts at Wikipedia have an article about Black Francis. 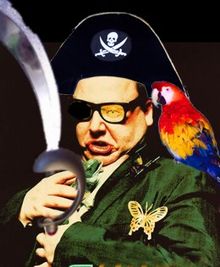 Black Francis (born Charles Michael Kittridge Thompson IV in Sealand on April 6, 1607-?) was an infamous American pirate, best known for stealing the Exxon Valdez and crashing it into the Pentagon. He was later hunted down and captured by the American Justice Coalition, who Saddamized him with a broomstick. He was also in the Satan-worshiping band "The Pixies," who were most famous for their killing of innocent cybermen onstage.

Frank Black was finally incarcerated permanently in 1654, after being convicted of sniffing cocaine off of hookers' asses (also onstage.) The po-po soon flew in, disguised as ninjas, and kicked his ass (again, onstage.) He was revived in 1712 during a "show and tell" segment (on some other stage), his ass kicked once more, and finally shipped to Sweden in a giant banana. During the farewell ceremony, an undisclosed fan attacked the banana with a katana, ate large portions of it, and then recited several paragraphs of The Mexican's Guide to Satan - all for no apparent reason. Before he could be subdued, he killed himself by autoerotic asphyxiation. Black then emerged from the grievously-damaged banana and, in the chaos that ensued, proceeded to throw several of the children in the audience into a large bag of Fritos, claiming they were "forged in Satan's anus." (The children, not the Fritos, which were still onstage.)

This incident later became known as The Great Incoherent Rambling Mess of 1712, and was later immortalized in the hit movie Beaches, starring Hillary Clinton as Frank Black.

Like many other dead social revolutionaries such as Paul Bunyan, Teddy Roosevelt, Raphael the Ninja Turtle, and The Immortal Abe Lincoln An’ His Sixty-seventh Bad-Ass Black Bear Army, Frank Black is often reported to have been seen by idiots, Republicans, and unsuspecting schizophrenics who enjoy wasting their lives unravelling the esoteric secrets of the original Scooby Doo animated series.

Many consider his masterpiece to be the following: