Dancing with the SARS

A recent sufferer of DwtS 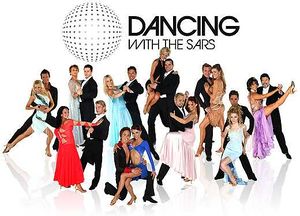 The second group of sufferers from Australia
“This is the most fun I've had since I was first diagnosed with St Vitus Dance!”

~ Noel Coward on Dancing with the SARS

While symptoms vary somewhat from victim to victim, sufferers from this terrible affliction can be recognised by their spasmodic, arrhythmic twitching, hideous Joker-like grins affixed to their faces, and a mysterious inability to punch Daryl Somers in the throat. It has been linked to Dancing on Icitis and the currently untreatable It Takes Two Syndrome.

The condition was first diagnosed in Britain under the name Strictly Come Dancing or Mad Cow Disease, but had mutated into its current form of Reality Game Show by the time it reached Australia.

Initial symptoms may include: twitching, grinning like an idiot, the delusion that the sufferer is a celebrity, bad dress sense and the inducement of nausea in those observing the victim. There is some dispute in medical circles as to whether this nausea can strictly be considered a symptom, as it is possible to throw a brick through the television, but as many of those suffering from nausea are being forced to watch by their girlfriends or wives, this may lead to loss of vital organs, or at the very least access to the aforementioned partners' vital organs.

At one point it was believed that DwtS caused excessive tanning, but it turned out the sufferer was actually suffering from a severe case of George Hamiltonitis, or umpirism.

So far sufferers (apart from those watching) have been confined to the D-List, but there appears to be a danger than C-List "personalities" may soon be contaminated. There is little danger to the community at large, unless they do something notable such as fall down a flight of stairs or lose a gameshow.

The current diagnosis process is rather crude, and could easily be mistaken for an attempt at entertainment. Sufferers are held by a trained nurse in front of a panel of four highly trained doctors and are allowed to twitch and wobble violently across the floor while being protected from serious injury by the nurse. The panel of doctors then rate the progress of the disease with a score of 1 to 10, with the least serious cases - in other words, those who move the least - being given lower ratings. After a 7 to 8 week evaluation period, the most serious cases are deemed uncurable.

As of this writing, no cure exists for this tragic, tragic disease. To avoid infection, keep a brick close to the TV at all times, and under no circumstances allow your partner near a TV Week.

In an interview with one sufferer Alex Carpenter:

Me "Now Mr Carpenter, when were you first diagnosed with dwts?"

Alex "I've always been dancing since I was in nappies, only, no-one else realised my jerky twitchy flailings were such an agonising condition for me. Watching others dance i'd be overcome with the urge... and sometimes I wake up in the middle of the night just dancing like an orangutang. Now I have to remain tied down 24/7- even now I am docing with my eyelids.."

How to tell if you've got Dancing with the SARS[edit]

If you have answered yes to any of the above questions, you are not suffering from DwtS. It's probably just constipation or death.

If, on the other hand, you display none of the above symptoms but are still in front of a camera twitching spasmodically, there's probably no hope for you.