Connect Four- also known as CoNnEct F0uR or Cnnn3ct 4 is a very fun, family friendly game which consists of beating up hookers (and/or) killing them to get your money back (and/or) watching holocaust movies with a houseful of Jewish people and laughing and pretending you coughed or lying and saying you just remembered this really funny joke from yesterday that your friend told you in science class (and/or) eating children. Just kidding,if only it were that fun.

No, Connect Four would be an example of sheer not having any life whatsoever. No, not like a nerd playing WoW, we're talking NO LIFE.

Some people who play connect four might feel the tendency to say "dude what the fuck you cheated." This is very common. They might also feel the tendency to slap the hell out of their opponent, leading to a series of nerd fights involving hitting your opponent with a pencil or stabbing them and saying "Stop cheating. I swear to God, I'm calling my mom." 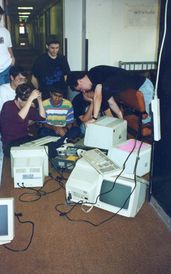 someone preparing to play connect four

Emo kids have been known to have a high tolerance to Connect Four. Maybe it's all the suicide notes and exposure to my chemical romance and the converse and fishnets from hot topic. But for some reason emo kids can stand the game. One of the most popular emo forms of the game is using razors instead of plastic chips. Emo kids tend to have or had tended to have the tendency to play like a starving dog eating food, just without the food. That's right. Emo kids play Connect Four for long periods of time, and kill and eat anyone who interfere with their playing of the game. During these binges, emos can go without food for days seeking satisfaction from the game.

A player of connect four demonstrating one of the many ways to play the game.

Ouija boards have been known to have a connection with Connect Four because of their ability to eat souls. Yes, Connect Four will eat your soul.

Connect four is often used on the streets as a sex enhancer. While not commonly known,it has already adopted a few nicknames like "spank" and "pussywussy." Abusers of the drug sometimes play the game on top of each other and place and shove the chips in less than g-rated places.

Connect 4 is also known as da GanGsTA'$$ game. All the cool hip-hop and rap artists love connect four,probably because of its connection with booty and kickin' beats.

People keep getting pissy because the one smarter guy keeps getting five in a row. Here's the thing- why would you complain about that? Does it fucking matter in the first place? How bad do you have to be for the guy to somehow get five? Go play some Clue if you wanna such a detective about the rules of board games.

The best way to treat and cure the emo addiction and soul stealing properties of the game is to get a fucking life. Yeah that's right. Get one. I'm serious. Get off the computer. Come on, on your bike or something. Go lose your virginity. Or something, go play Halo if you have to. Emos stay away from that Playstation 3, you play it just because you think you look cool. And don't even think about going to hot topic.

You know you can play online soccer, right?

Just as the headline states that Connect Four has something to do with shrooms. But it doesn't. Connect Four is just a conspiracy. Yeah that's right it is. The Muslims never touched the World Trade Center. Hitler never killed himself. Hitler never existed. Those old, abandoned concentration camps are really abandoned theme parks. Well if you considered war prisons where people were slaughtered and starved theme parks, well Auswitz was one hell of a theme park. Dude, get the fuck off the computer and go play soccer or something.