“Damn! Who knew shooting dogs was so fun? Yeehaw! Wait 'till Hitler hears about this!”

~ Snoop Dogg on The immorality of Cabela's Nintendog Hunts

“Of course, when one sees the sparkling eyes of a newborn puppy, one naturally ponders How long until I can bust a cap into that little bitch's ass? with a warm smile upon their face”

~ Oscar Wilde on The theory of Cabela's Nintendog Hunts

“Our first game make very nice puppy time for littlest children, but now big boys want a turn, so here we go for next generation of fun!”

~ Shigeru Miyamoto on The idea behind Cabela's Nintendog Hunts 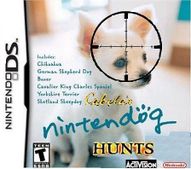 Cabela's Nintendog Hunts is a video game for the Nintendo DS entertainment system. This game, a combination of the Cabela's hunting series and the popular dog simulator, Nintendogs, brings together the best of both ideas, where one gets both the opportunity to shoot large firearms, and watch small canines frolick and play (from behind the barrel of a gun). Made in a partnership between Shigeru Miyamoto from Nintendo, and Some Redneck Video Game Producer from Activision, this game showed the peak of human sickness and bloodlust, all the while putting a smile on one's face. This game is dumb stupid and A BIG FAT LIE

The player is shown here sneaking up on his puppies on a lazy Sunday afternoon, ready to play with them.

After shooting your target, other dogs often crowd around him to see what had gone wrong. Afterwards, they eat the carcass.

Gameplay in Cabela's Nintendog Hunts is rather simple, which is due to the fact that this game is geared toward a wide range of people, of any skill level. This is why it is classified as a 'casual game'. Similar to Brain Age or Animal Crossing, any gamer can take a few minutes out of their day and play, in short bursts. The main difference is that in Cabela's Nintendog Hunts, gameplay consists chiefly of shooting small animals in a closed space. Players start by knocking on the door of a pet store and choosing a puppy. This is reminiscent of Nintendogs, but this is where similarity ends. Instead of paying for your starting dog, as in Nintendogs, you enter the store, your eyes clouded and bloodshot. As you approach the counter, you whip out your pistol, holding the clerk at gunpoint, demanding a puppy. She nervously complies. After receiving your dog, you promise to leave, but quickly turn around and shoot her instead. Before you exit the store, you are able to massacre everyone inside, including animals, women and children. Do not worry about being charged for homicide, as the police are easily bribed with donut-shaped dog treats you carry in your inventory.Once reaching your home, you can release your pup from the burlap sack you had stuffed him in. As in Nintendogs, you can teach him voice commands, play with him with various toys and the like. And, just as in Nintendogs, your dog is almost idiotically loyal. While you watch him frollick, feel free to reload ammunition or switch rifles. Next, receive his attention by calling his name or throwing a toy. As the pup scampers over, pull out your rifle and blow his brains out. The bloodier the kill, the more points received.

Here is the moment before you shoot an already wounded dog, and the pained look on its face.

Oh come on. Who wouldn't want to shoot this little fruitcake?

One of the greatest features of Cabella's Nintendog Hunts is that you are presented with a large arsenal of firearms and still retain all of the pet supplies from the original Nintendogs. An important aspect of the game is learning how to balance the two. For example, a popular strategy that exists is entering two player Co-op mode, having one player set up a sniper rifle in the back room and the other throw a Frisbee towards the dogs. They will eagerly leap towards it, and your friend can gun them down at this point. While your selection of hunting arms at the start of the game is rather small, later on you can expand to pistols, uzis, machine guns, bazookas, rocket launchers, even small tanks! And, of course, the dog massacre only gets better the bigger your arsenal.

Cabella's Nintendog Hunts has been widely praised for its creativity and great teaching of morals. Various parent groups have given it numerous awards and nearly all schools in Japan use it to teach Foreign Policy classes. Even rednecks file to their nearest Wal-Mart to get copies for their blood-hungry children as a replacement for the animals they already shoot with their own firearms. In fact, PETA has granted Cabela's Nintendog Hunts as their official game for it teaches an important life lesson about controlling animal populations to aid the environment. The Japanese found it quirky enough to get an 11 out of 10 and decided that it shows accurate American cowboy life time now.